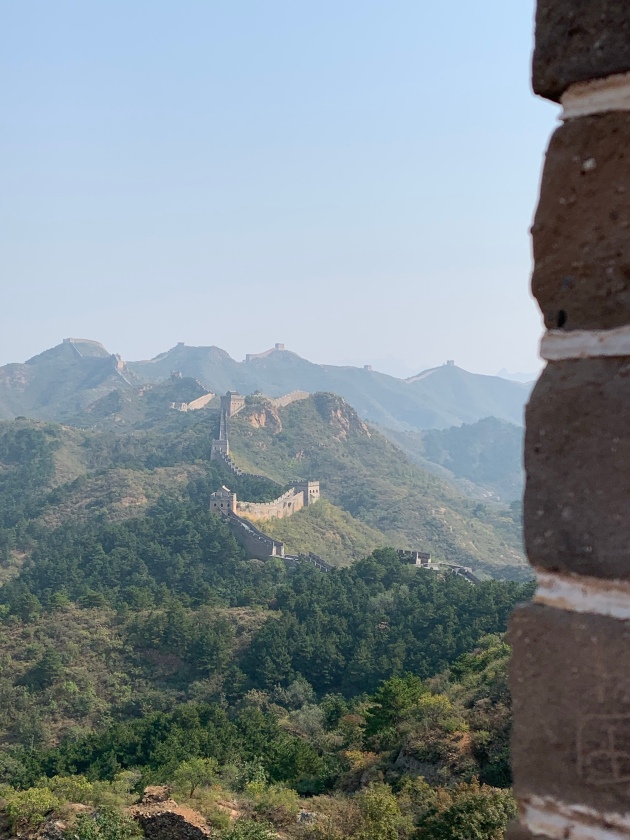 This post is being written over a month after the events described.

Long before we planned on going to Asia, we said we would like to go someday in order to see the Great Wall. Finally, today is that day!

When we decide to book the Viking cruise, we knew that their included tour for the first full day aboard was to the Great Wall. BUT, that was going to mean about a 3 hour bus ride in each direction and Viking would be visiting during the National Holiday week, we quickly began to explore other options.

We didn’t know that there were so many sections of the wall that were open to tourists, not that most had been heavily restored while a couple of sections are “wild” and unrestored. After much research (Link to descriptions of the Great Wall) we decided to do the Jinshanling section which had both restored and unrestored sections. We were concerned however as it would involve some hiking but our contact at the agency said they had other clients who had done it. We also hoped that since this section wasn’t as popular that we wouldn’t run into huge crowds as we had seen in our research:

We left the hotel at 7:30 and after an hour and a half or so drive we got our first glimpse of the Wall from the highway. Shortly thereafter we arrived at the entrance where the driver dropped us off (he headed to the east gate where he would pick us up several hours later).

From here Coco and we rode a big golf cart to the entrance building where Coco bought our tickets. You can see in the map what we hoped to hike.

The hike uphill to get to the wall was pretty steep and while there was a cable car, that seemed like cheating so we walked up the asphalt and gravel path and stairs until we reached the gate where we climbed up, into and on the wall. 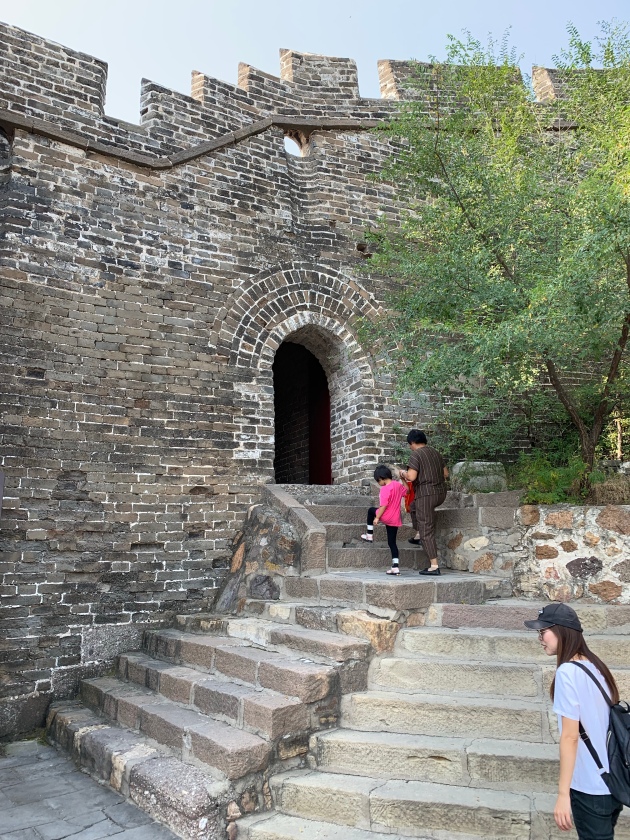 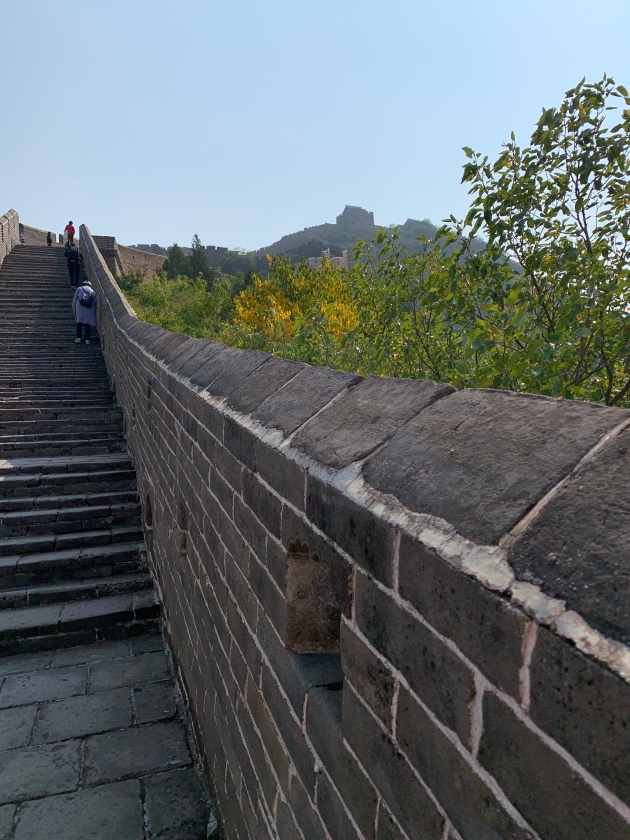 The wall is just incredible. To see it disappearing into the distance in both directions and to think of what it took to build this 13,000 mile long building over 2,300 years ago is just amazing. 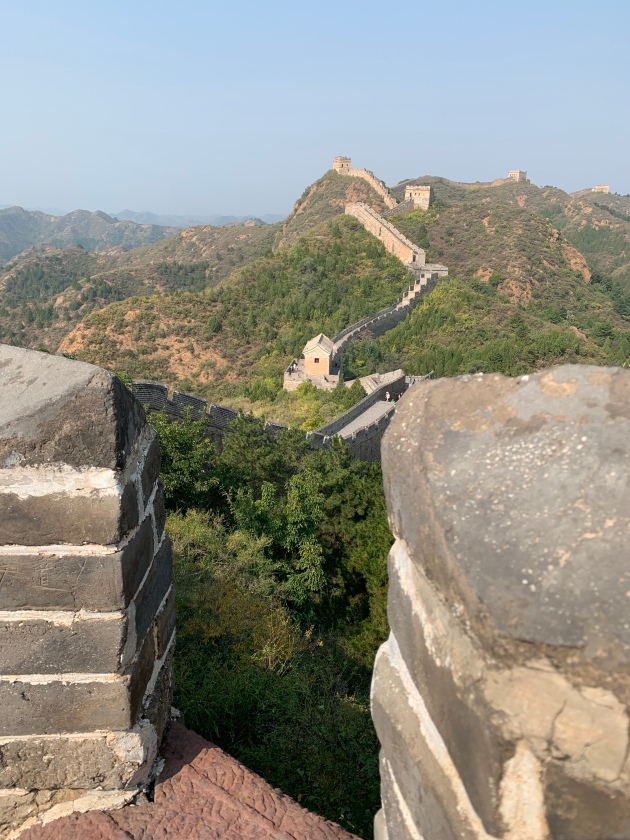 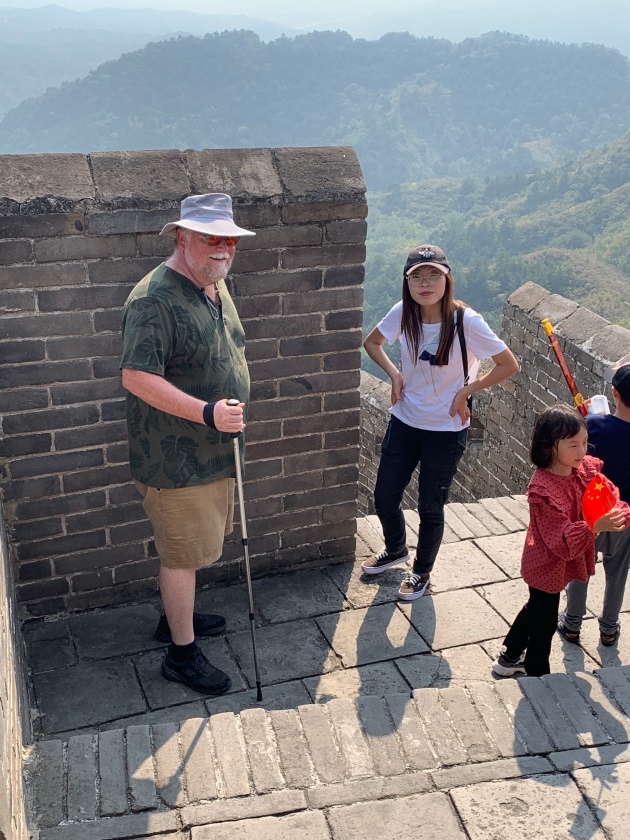 While our intention had been to walk both this restored section and make our way to the unrestored portion, the wall conquered us. The steps up and then down and then up and up and then down and down killed us. Thank goodness we had splurged at Target for the set of 19.99 hiking poles or otherwise I don’t think either of us would have made it. Some of the steps were almost as high as my knee-Crazy steep! Anyway, after about two hours of being on the wall we asked Coco (that’s her hands on her hips in the picture with Mike) how much further to we got to the Wild section. When she said we had five more towers (it’s the last tower you can see on the far right of the top picture in those just above and at this we had only been through two plus our entry point) we both decided that it was not going to be possible. 😢 While it was disappointing to not do what we had hoped, we were thrilled to have been able to do it at all. If you have any notion you want to walk on the Great Wall be sure and do it when you are able. We are so glad we did, and as you can see we didn’t have crowds to deal with. We saw the same 15-20 people all day including the family below who asked us to take their picture. It was so much more enjoyable than what our fellow cruisers described they did later in the week. Not only did they have the 3 hour bus ride there (and due to traffic a 4 hour one back), they only had a short visit to the wall and had to fight their way through big crowds. We truly enjoyed the experience and with the exception of the disappointment of having to leave the wall after only doing about a third of what we had hoped (compare the marked up map below to the one at the top of the post) it was a wonderful time and one we wouldn’t trade for anything. 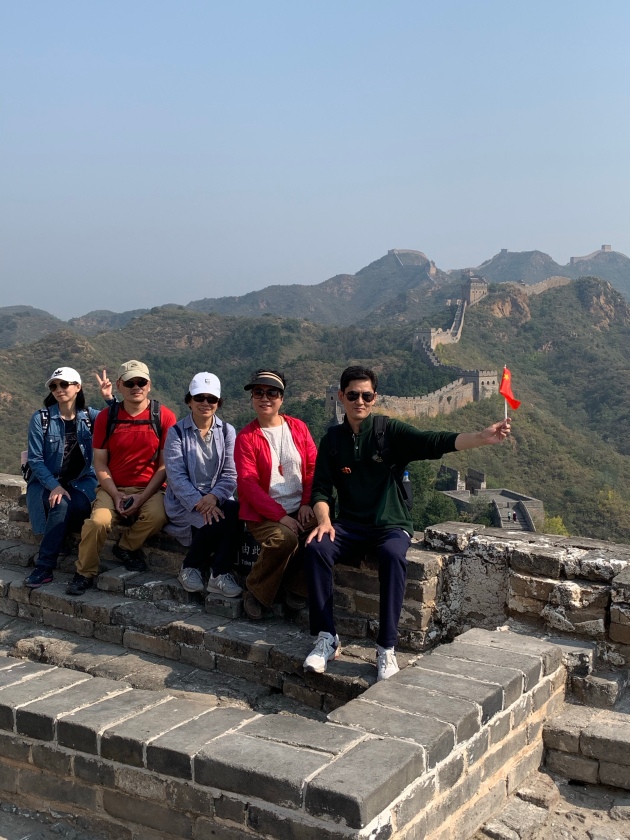 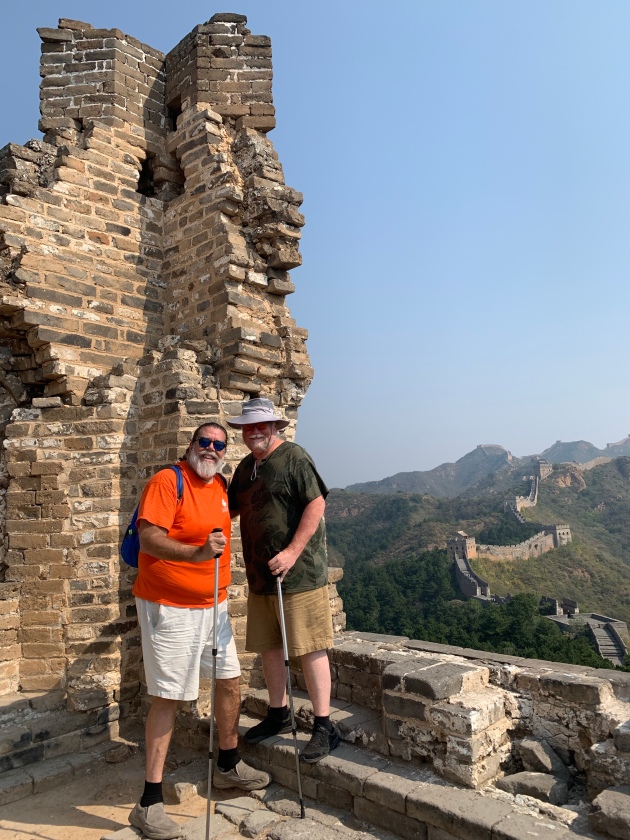 After walking to the next exit point and climbing back down the hill followed by one of the several souvenir vendors (who we had seen at the entrance, at the towers and now on the way down – why won’t they take no for an answer), Coco finally had cell service and she was able to tell the driver to come back from the other end of this section for us.

We then went to a local restaurant and were the last lunch customers as as soon as they served us, all of them sat down and had lunch too.

Coco ordered for all three of us and just like Rocky before her we had too much food. But after our exercise, we ended up finishing almost all! We had a delicious slightly spicy beef stir fry, fried rice, an omelet with green onions, a tofu (it was thinly sliced and very dry-almost like a noodle) and snow pea dish, wok fryed greens (sorta a cross between spinach and kale) and sweet and sour pork. We questioned Coco about the last dish as we both thought this was a Chinese American dish but she swears it is authentic. It was very tasty and while sweet, not as much as here in the states. We were intrigued by the set up at each place (we had seen the same thing in Xi’an). Apparently the smaller restaurants use a service to wash, sterilize and package the dishes rather than having staff to do it. 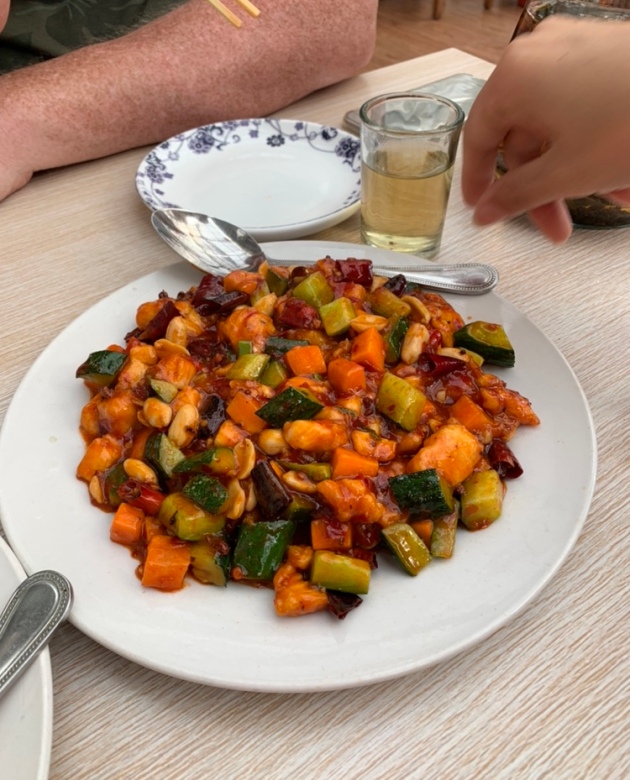 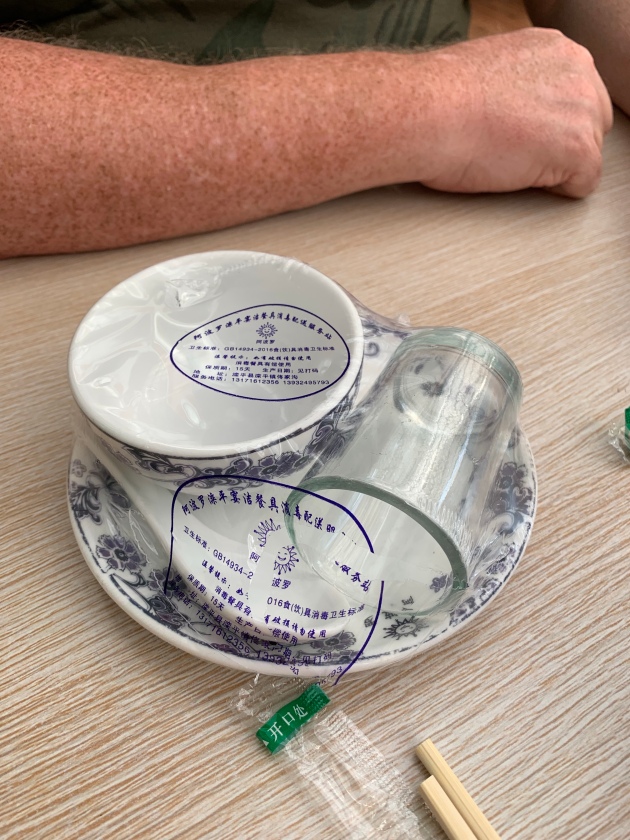 After lunch, we made the drive back into the city. After our big lunch, we weren’t hungry for dinner but we did need some cash so after a little bit of a rest we explored the blocks around our place. Like everywhere else, there were lots of National Holiday decorations up. I was surprised that poinsettias seemed to be the flower of choice – not sure how they kept them from wilting. We ended up buying a few sodas and some interesting Chinese snacks which we enjoyed while watching some tv later that evening. Unfortunately, I didn’t get to try the purple yam ice cream cone at McDonald’s 😢.

Needless to say, we weren’t up late and slept good after the great day on the Great Wall. 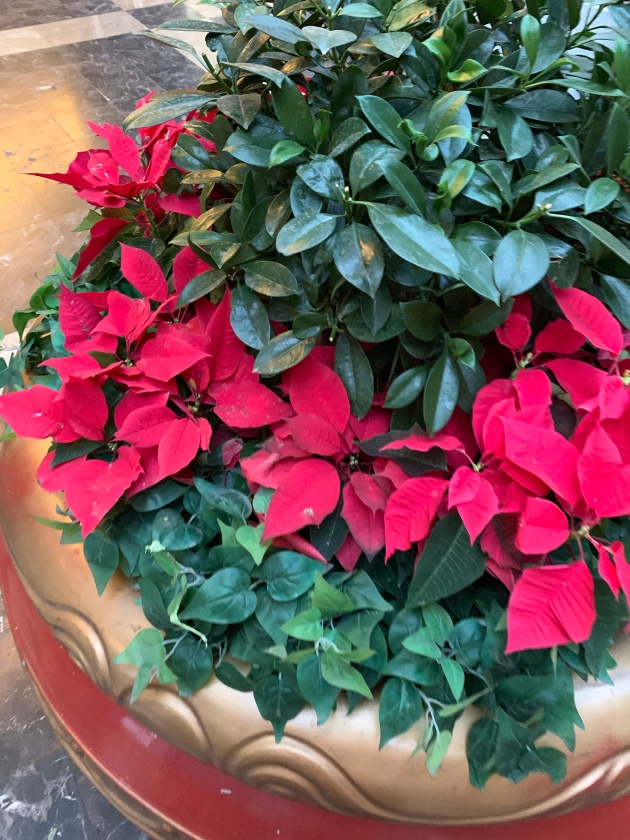