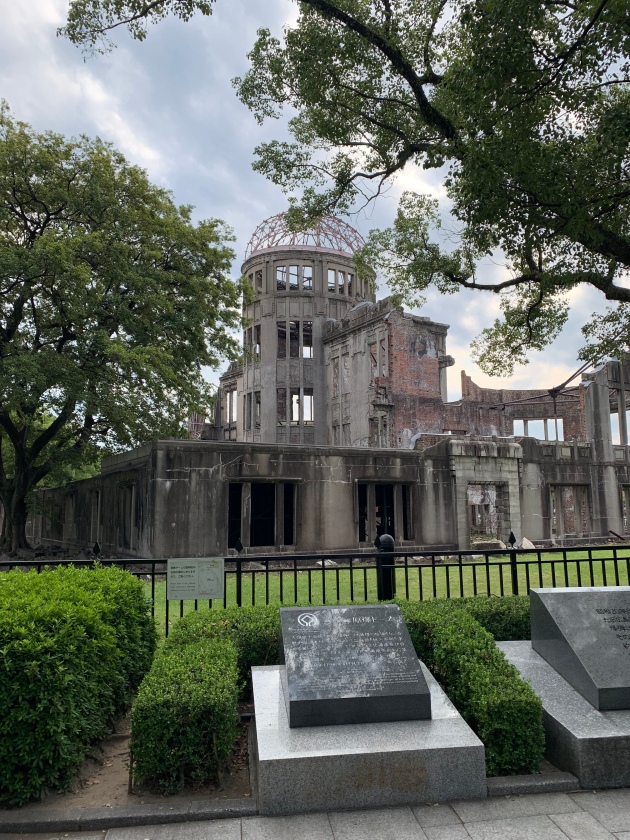 We took our second bullet train early in the morning for the roughly two hour trip to Hiroshima. We had arranged another “Goodwill” Guide and Tai met us as promised at the train station. That’s him below in a picture taken on the ferry to our first stop, Miyajima. This resort island is known for its Shinto Shrine that has a huge Torii partially submerged at high tide. 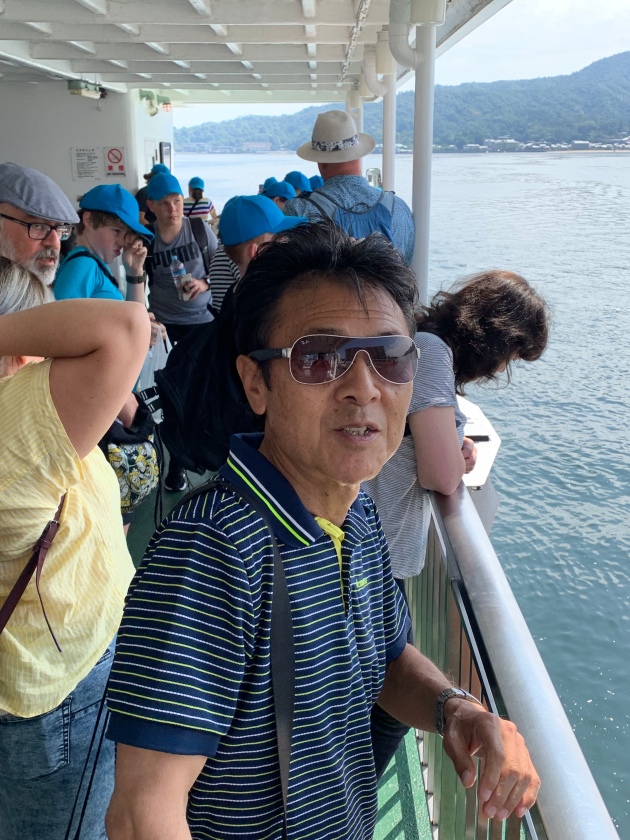 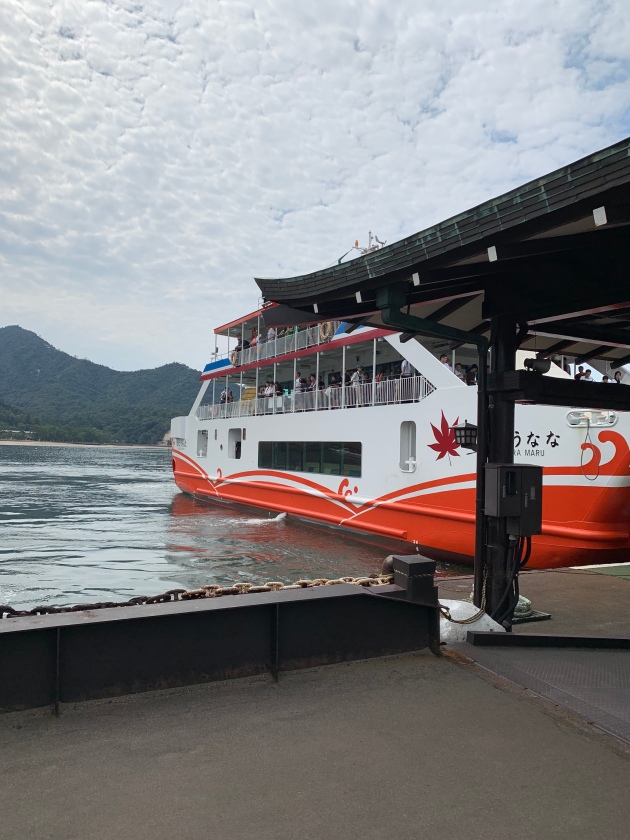 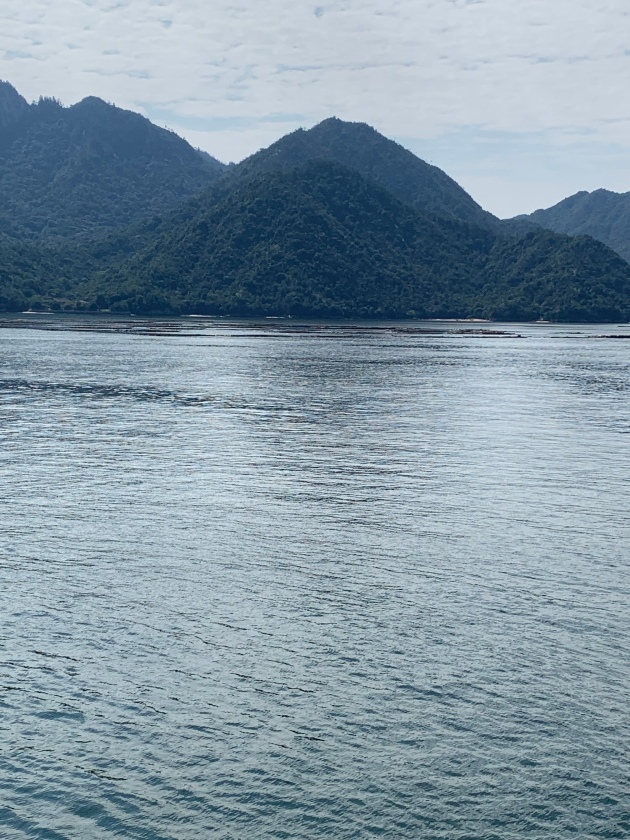 Unbeknownst to me (despite copious research) the gate is undergoing renovations so rather than seeing this: 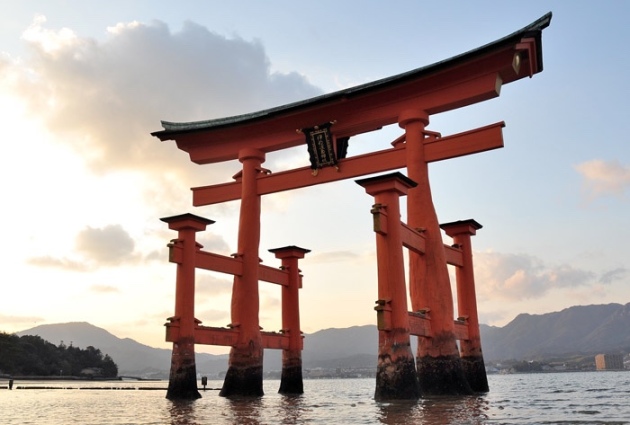 here is what we got: 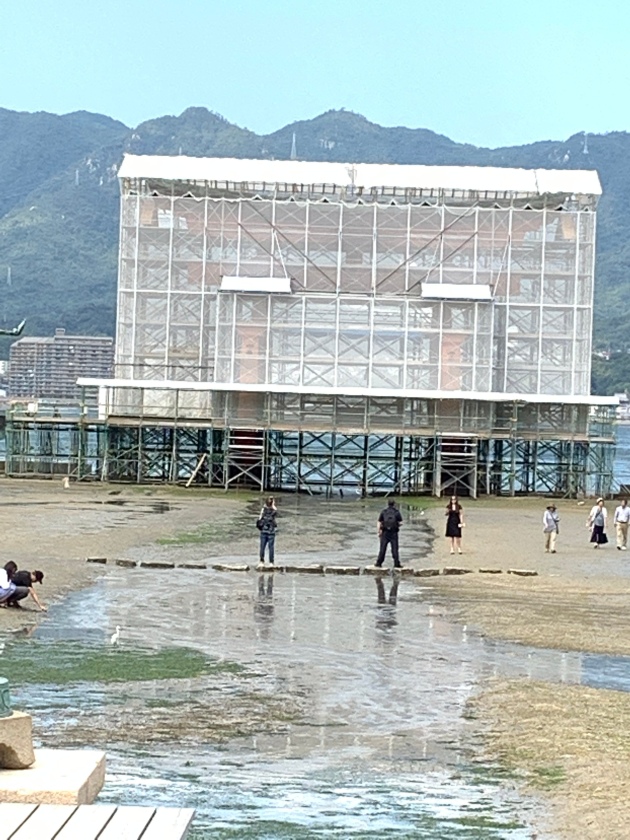 Mike’s bad juju continues-remember he didn’t get to see Big Ben’s Tower in London due to similar scaffolding. If we ever get him to Paris I’m afraid the Eiffel Tower may be under a cloak too!

The shrine itself is pretty interesting as it is mostly overwater (or at low tide, over sand😢) 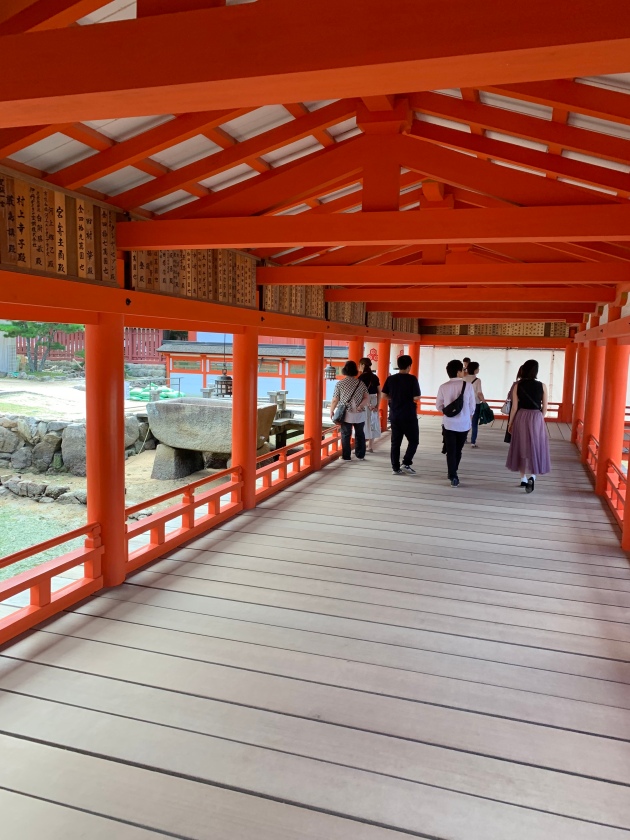 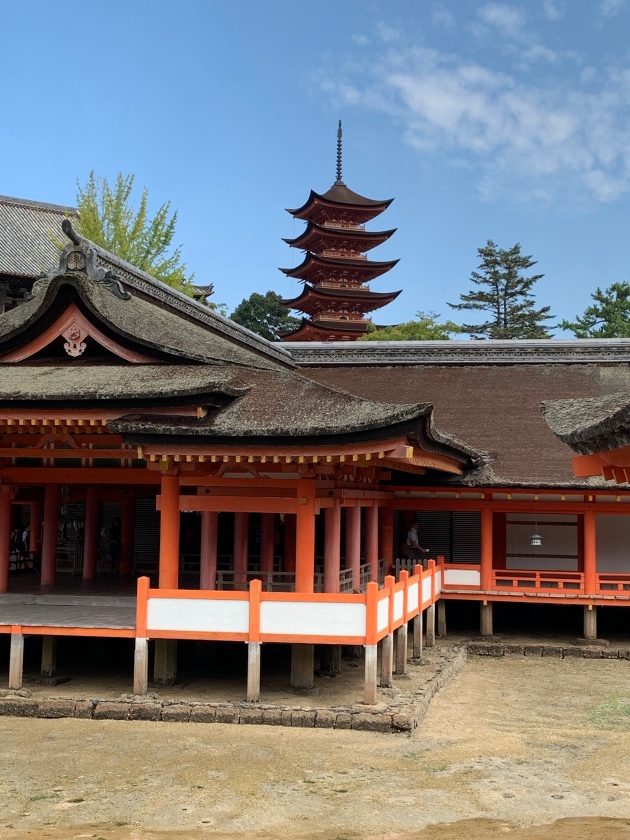 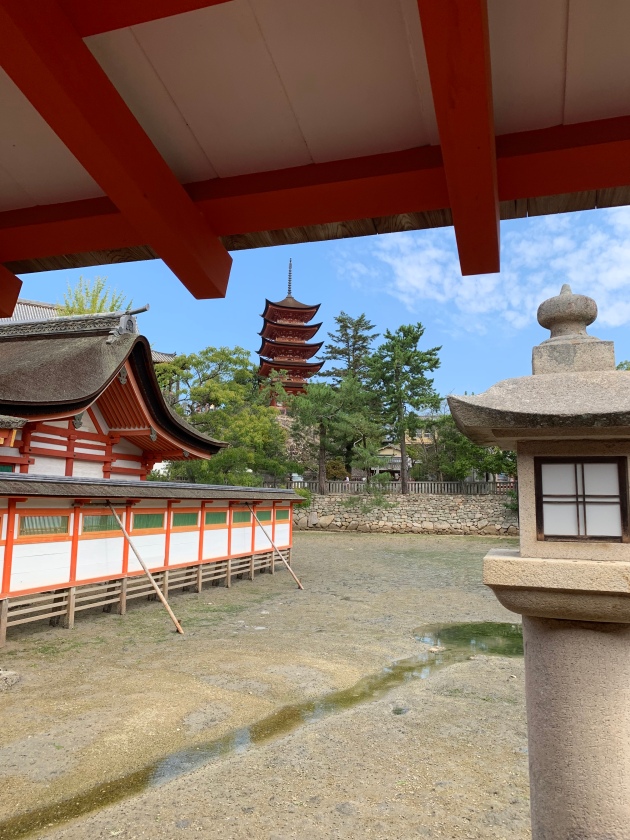 We hiked up lots of stairs to get to the beautiful pagoda that dominates the hillside where we took our standard selfie and Tai all but laid on the ground to take a much nicer photo. 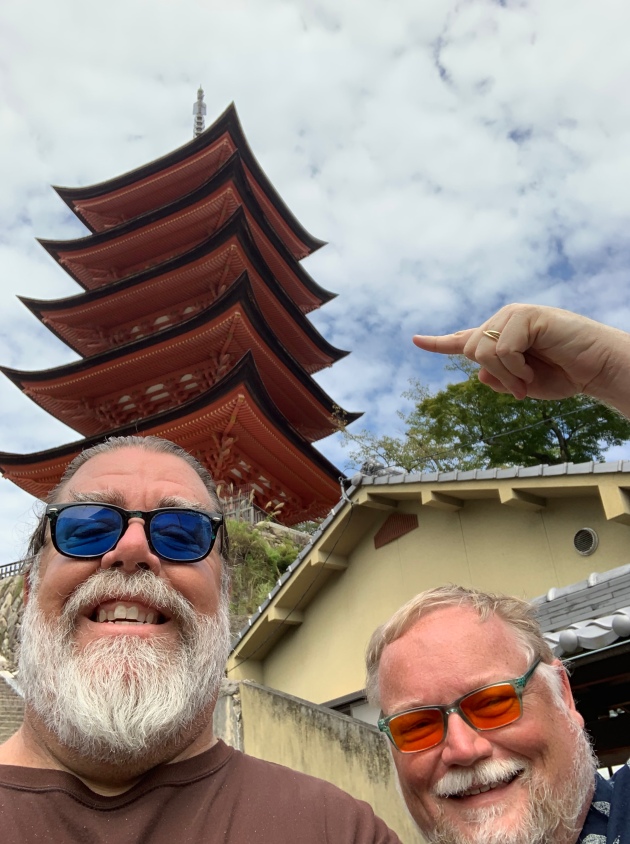 The island is also home to a herd (perhaps several) of small deer. They aren’t at all afraid of people and we were warned to keep our ferry tickets put away as they have been know to snatch and eat them. Luckily our train passes were good on this ferry so that wasn’t a concern for us! 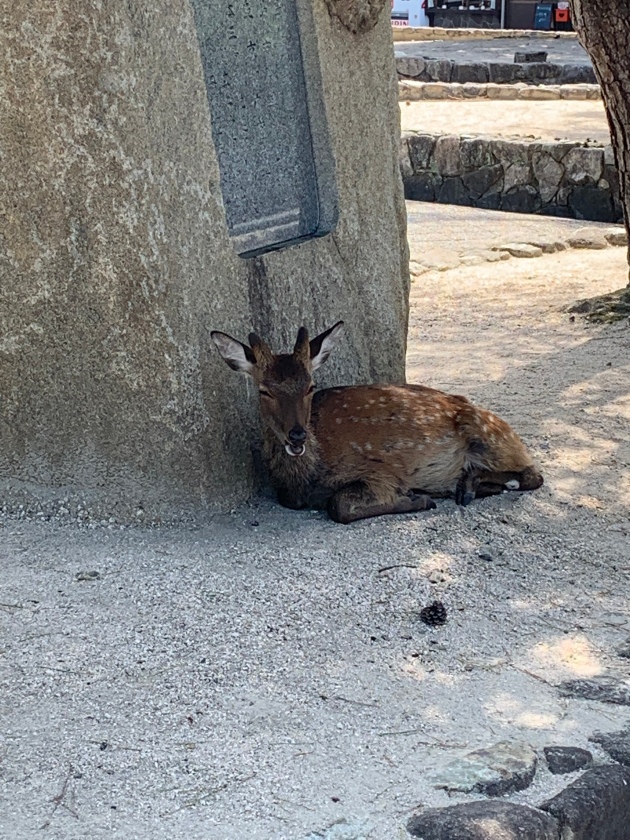 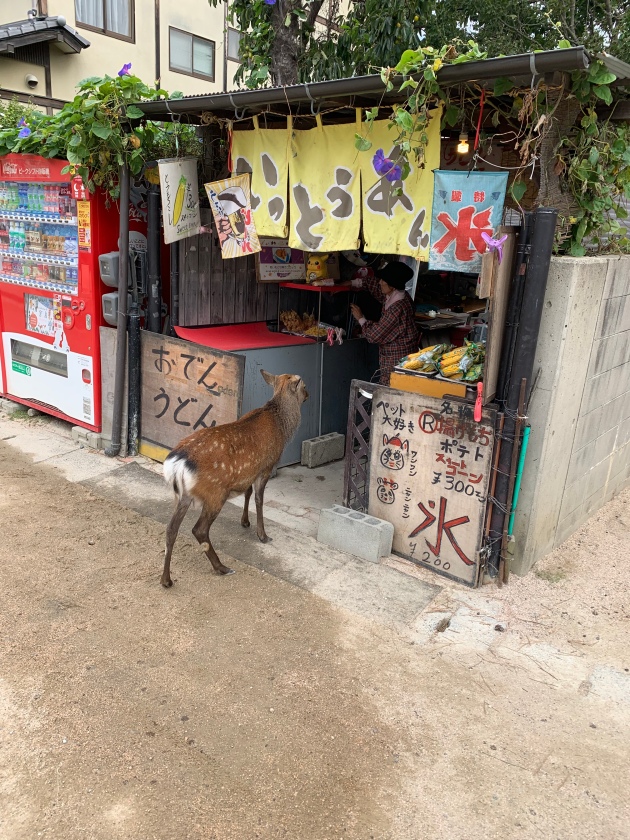 After returning to the ferry and back to the mainland, we took the Hiroshima streetcar back into the city. We had ridden a train out from the City as it was covered by our rail pass but due to time, Tai said it would be faster overall to take the streetcar since it would make a stop directly at the Peace Park. I’m always up for trying new transportation and the streetcar was great. Tai taught Mike how to buy our ticket and off we went. I particularly liked the attendant in her white gloves who walked through the car after each stop to make change if needed. 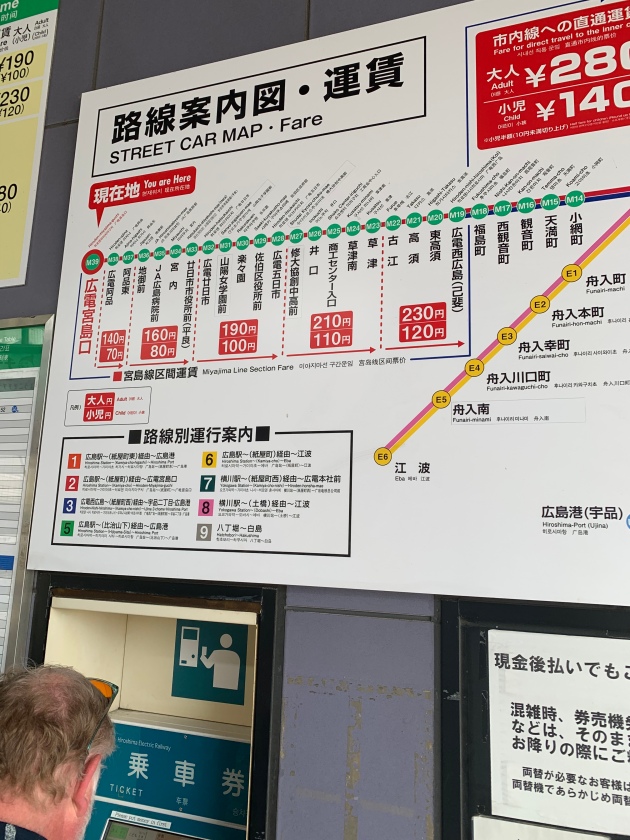 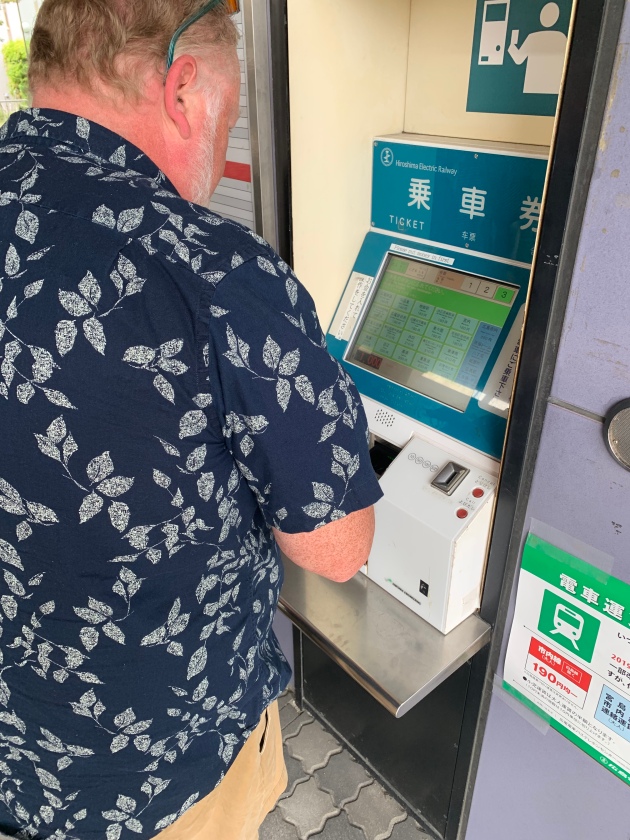 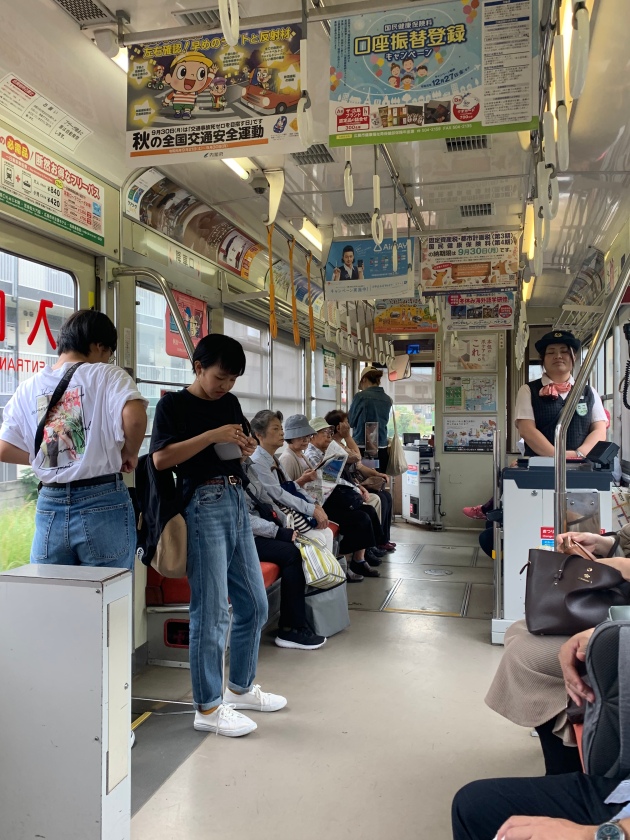 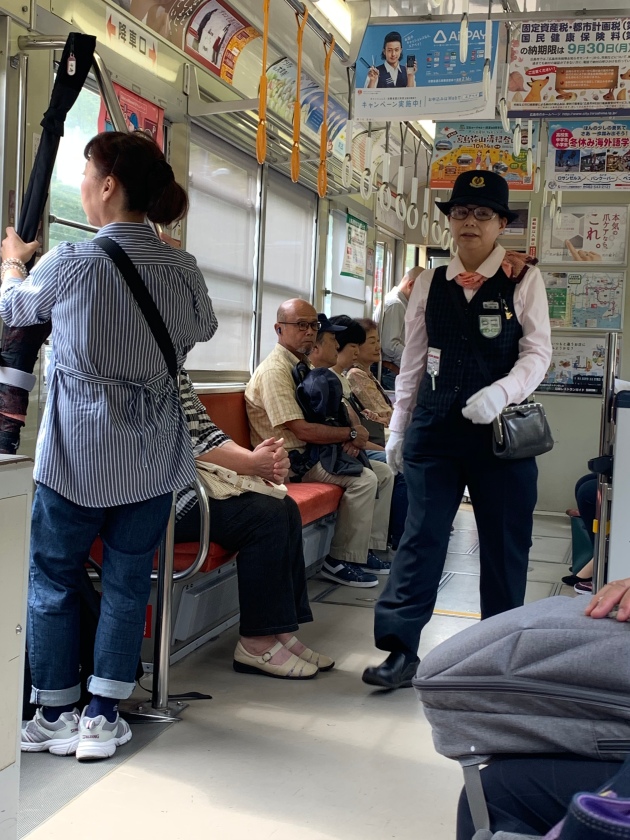 We arrived at the Peace Park stop but before we visited it was time for lunch. Tai took us to a restaurant in a department store. This is fairly typical in Japan, the malls and department stores have floors devoted to restaurants. In the one we visited I counted five different ones on the floor he took us too. We had Okonomiyaki. This delicious cross between a pancake and an omelet was delicious! We had seen it during our YouTube research so we were glad Tai suggested it. The dish is made on a flattop by making a crepe, covering it with cabbage, sprouts, other fillings (one of ours included local oysters) an egg, special sauce (sorta a sweet and sour Worcestershire) and noodles. Through an intricate series of flipping you end up with crispy noodles on the outside and gooey deliciousness inside. While we ate at a table, if you sit at the flat top, you eat it directly off the griddle. Either way it was Yummy! 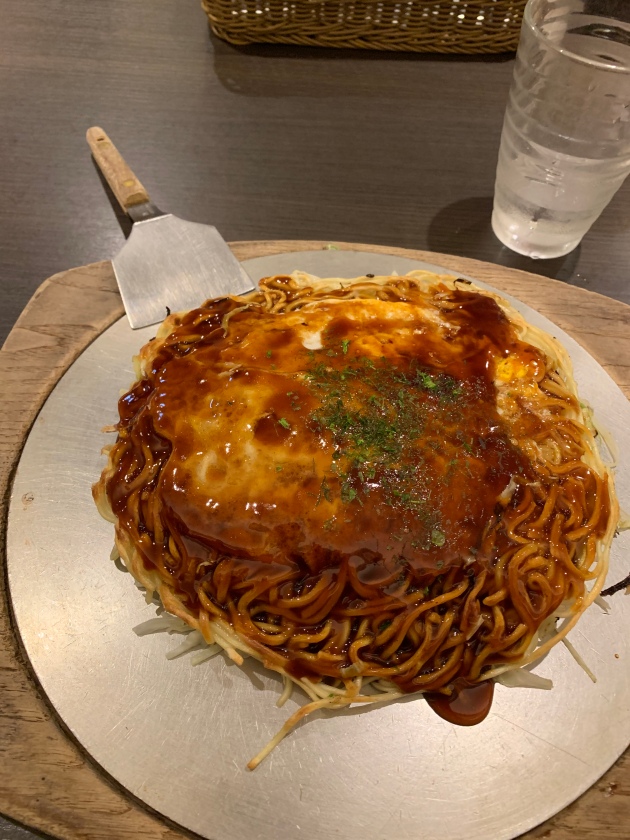 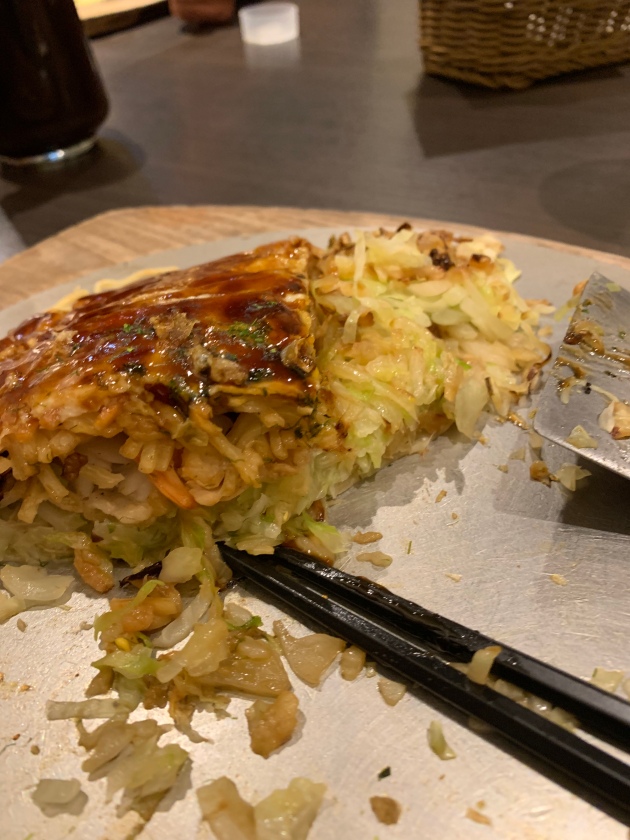 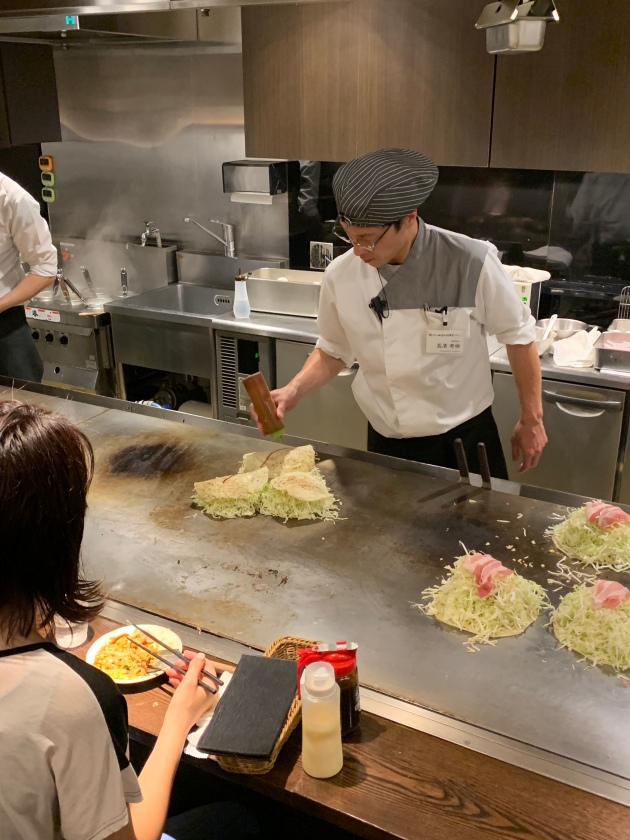 We really enjoyed our time with Tai. He is a recent retiree also and enjoys being a goodwill guide to improve his English (which is already amazing!) it was fun to watch him pull out his phone and look up translations and then ask us to explain certain phrases that don’t translate exactly. For example, at some point I said in relation to our first visit to China that we took the cruise to “dip our toe in the water”. This phrase obviously doesn’t make much sense when directly translated but once we explained, Tai grinned and reached for his notepad to write it down. I would love it if I spoke a foreign language enough to be able to be a Goodwill Guide in the US. 😢 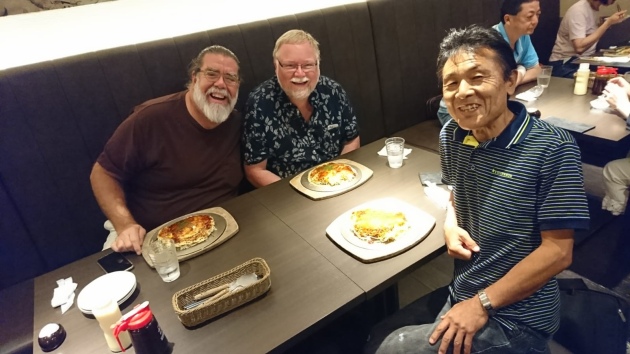 After lunch we walked a block or so, to reach the Peace Park. This park is built around the former municipal building whose dome was the sighting point for the knowing when to drop the world’s first atomic bomb. The title picture for this post is what one sees when entering the park. The park is beautiful and and spreads across both sides of the river. It is in start contrast to the destroyed remnants of the building. I was particularly taken with the fallen stone and brick ruble scattered around the buildings. 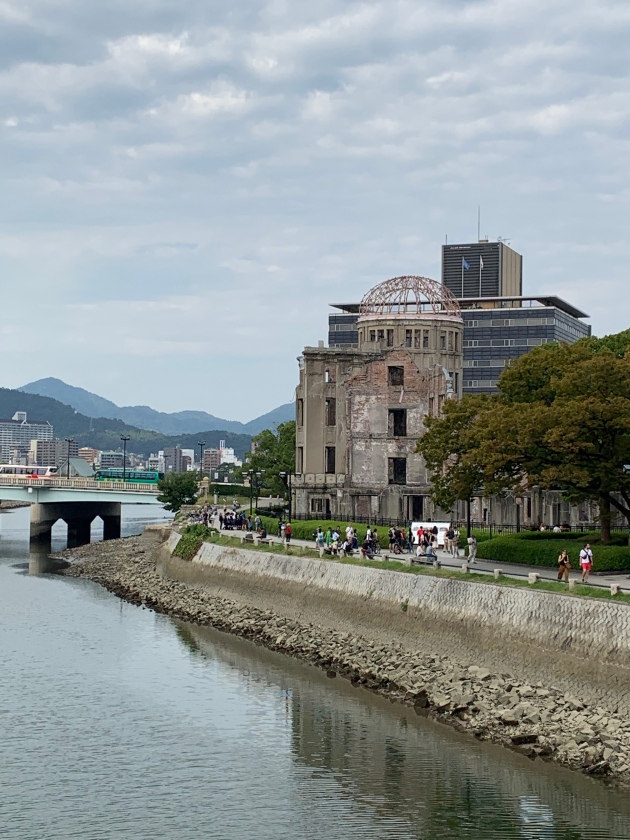 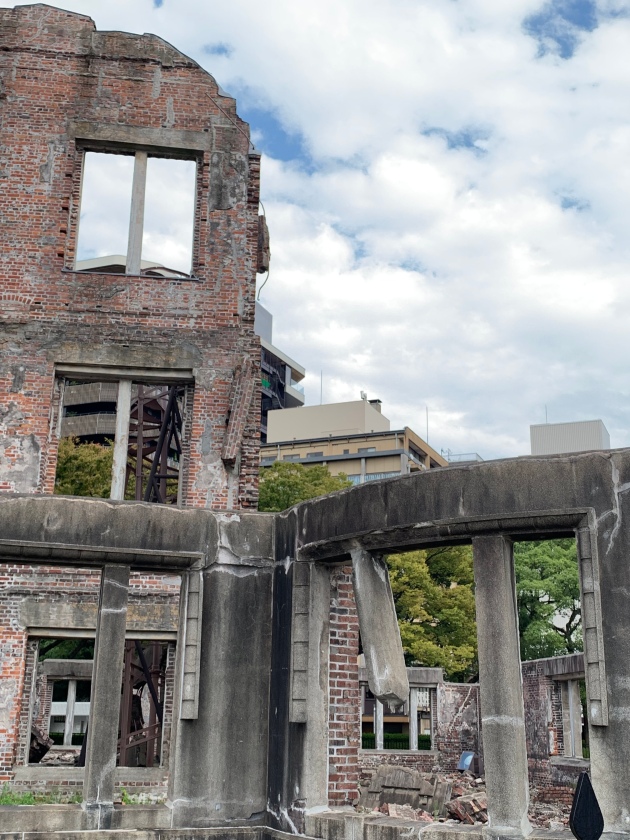 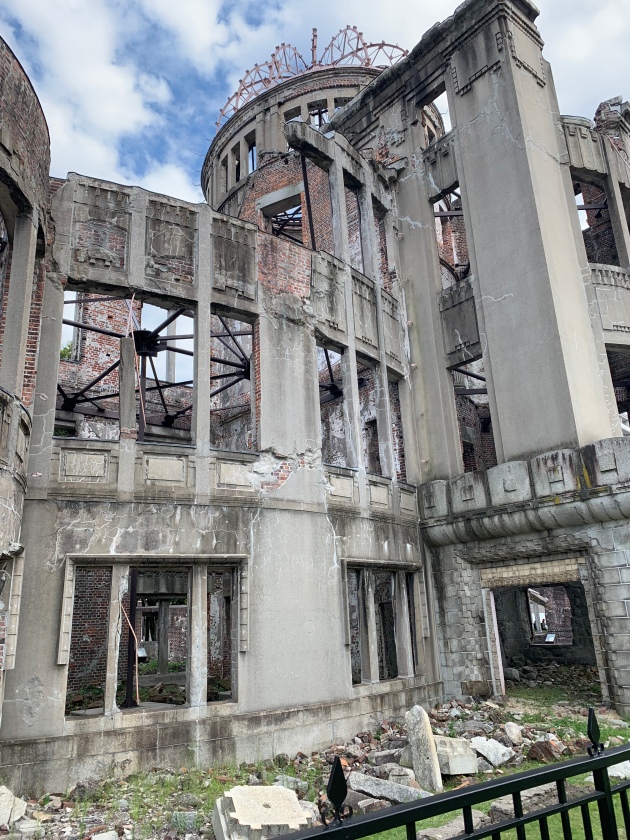 In addition to a Museum which we didn’t have time to visit, there are memorials throughout the park. 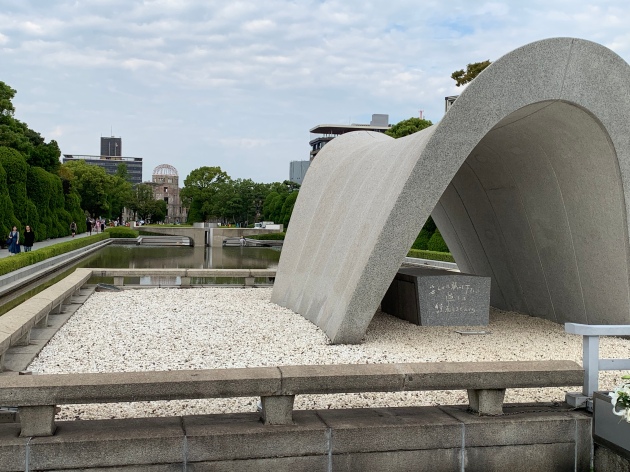 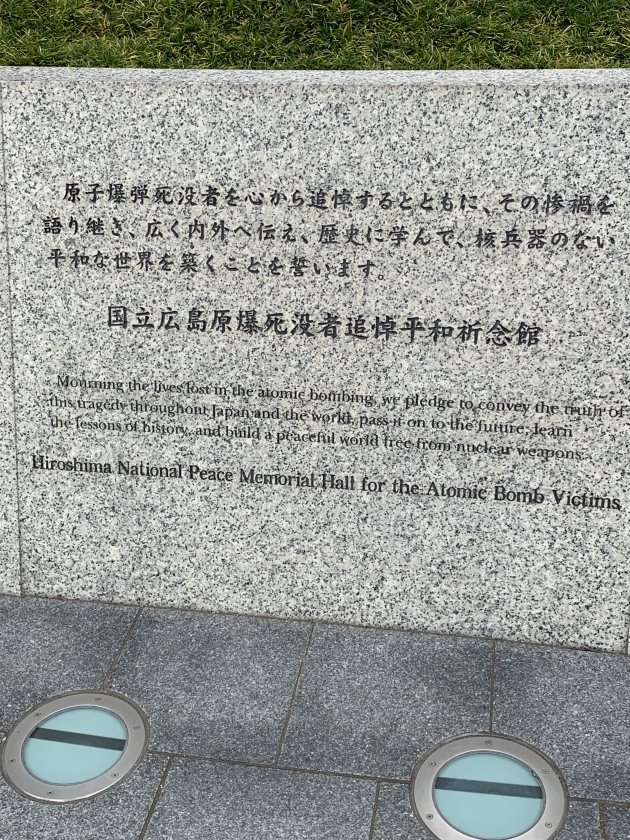 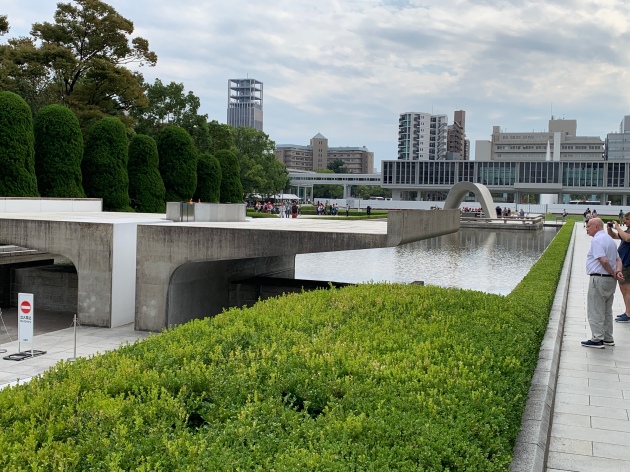 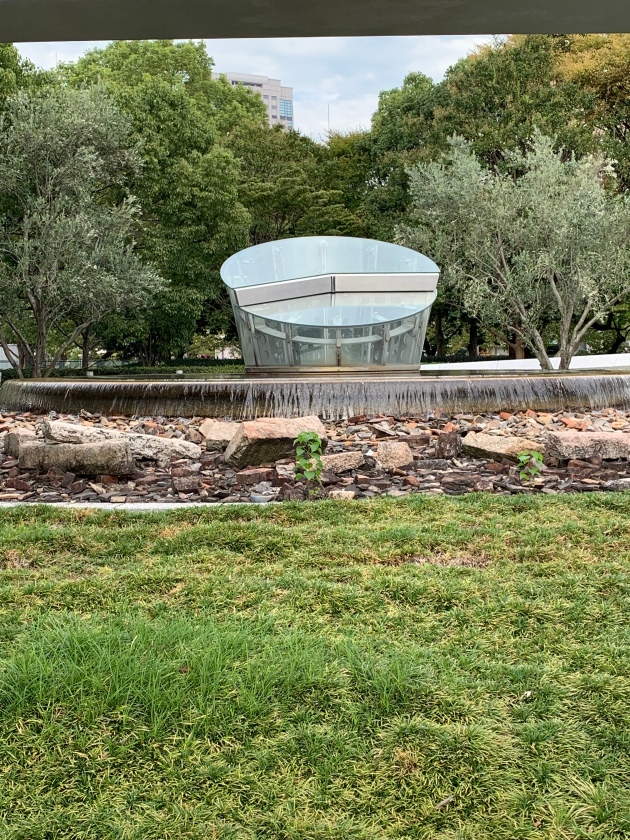 The most moving is the Children’s Peace Memorial. It was inspired by Sadako Sasaki who was exposed but not injured during the original blast when she was two years old. Nine years master, she was diagnosed with leukemia. Believing the ancient practice of folding origami paper cranes would bring her health, she started folding and continued to do so until her death 8 months later. Today, in addition to the clacker of the bell that hangs in the center of the Children’s Memorial, there are thousands of cranes that people around the world have folded in the children’s memory and in the hope for peace surrounding the monument. The modern connection between paper cranes and peace is said to be the result of Sadako’s original cranes. 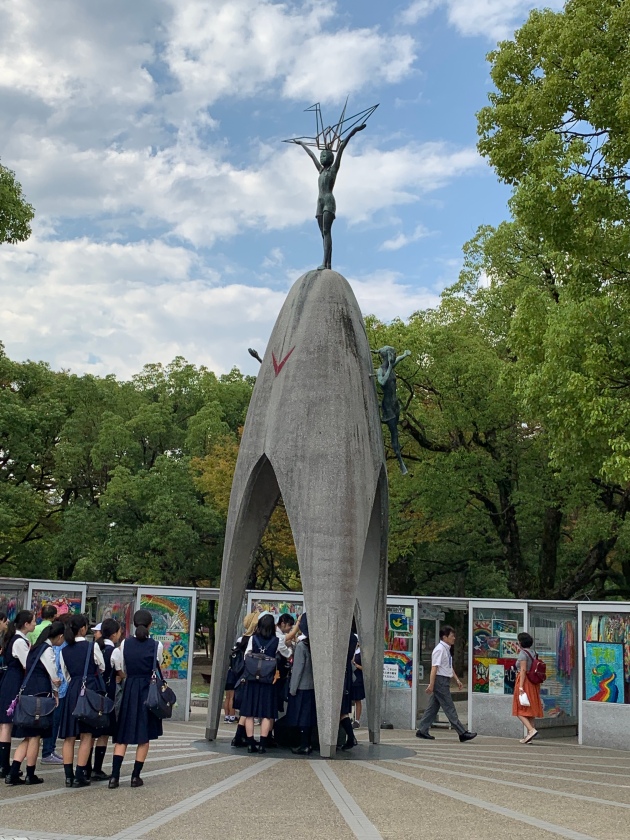 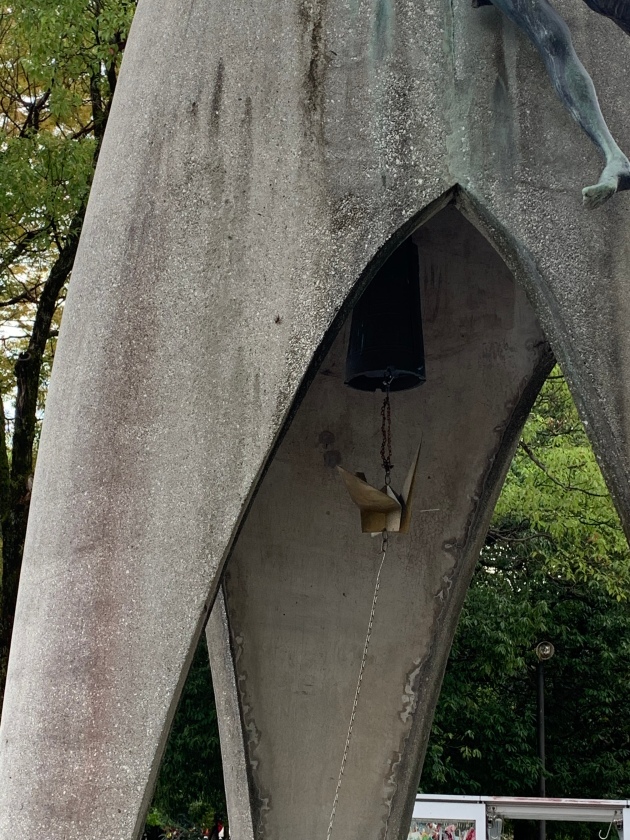 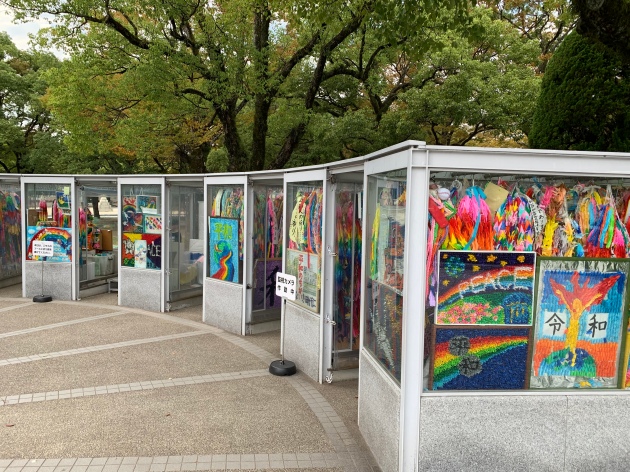 Our visit to the Peace Park was very impactful. It is awful to think of the horror that the bomb wrought. Of course the horror of war is also unimaginable. I hope that the goal of this park to achieve Peace in the world is someday permanently achieved. This is also probably a good time to share my thoughts regarding the way the Japanese treat us. Unfortunately I never felt close enough to any of the Japanese people I met to discuss it with them, but I found it surprising that there appeared to be no resentment towards Americans. Given the devastation the war wrought I expected that they would not be as accepting and friendly. Perhaps it is that ingrained Japanese politeness and desire to not disrupt. I mean a people who don’t blow their car horns or don’t ever push to get on or off a subway certainly wouldn’t want to treat anyone badly simply because we retaliated for a surprise attack by defeating them. Anyway, not trying to be political, just an observation.

After thanking Tai for his time, stories and knowledge, we headed back to Kyoto arriving about 12 hours after we left. Since we were still stuffed from lunch we ended up eating some leftovers we had in the room and hitting the sack. It had been a long but meaningful day.

Tomorrow we head to China!