Greetings from Uniontown in the Laurel Highlands of Pennsylvania! We left Washington this morning about 10:30 after a delicious breakfast at Bob & Edith’s Diner. 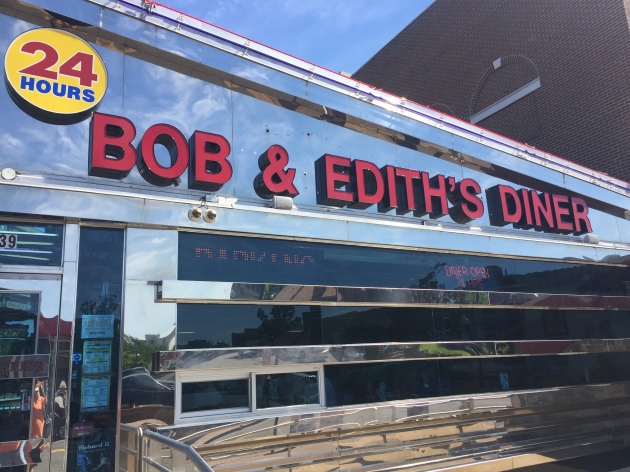 I even got to have a half smoke without having to go into the district to visit Ben’s Chili Bowl.

After making it out of the awful traffic around the capital we headed up through Maryland towards Pennsylvania. Along the way we stopped and took a short walk at one of the parks along the Chesapeake and Ohio Canal. The canal was built after the Erie Canal was completed and had started to hurt the economy of the area. Unfortunately it was never completed all the way to the Ohio River, but it did provide for the transportation of coal and other goods from West Virginia to the Chesapeake Bay. The C&O Canal was used until 1924. Currently, the Canal is visible in most places but at others it is completely overgrown and even has trees growing in the middle of it-but the haul trail where the Mules walked to haul the flat boats is now a very popular bike trail.

We also saw Mama & Daddy Duck along with their new chicks! (Sorry for crappy focus but they were moving fast!) 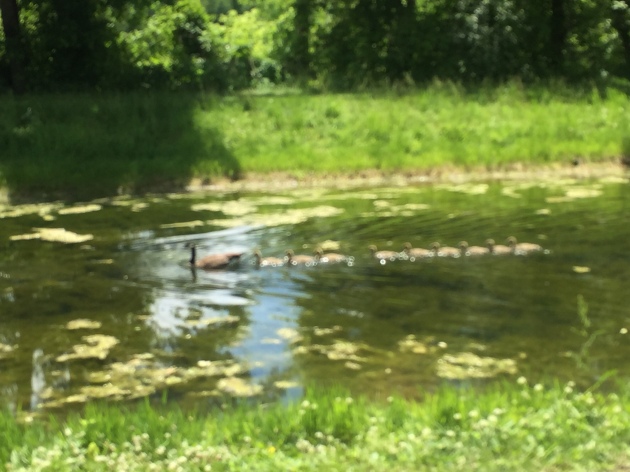 We stopped in the Maryland mountains in Flintstone for a quick lunch at “The Girls Cookin”. Tasty lunch but we weren’t sold on some of the decor!

Our focus of the day was not the Canal or squirrel friends at lunch, rather we had tickets to tour Kentuck Knob. This Usonian https://www.dwell.com/article/usonian-homes-frank-lloyd-wright-e75b5b56 house by Frank Lloyd Wright was built in 1956 for Mr & Mrs Hagan, purveyors of ice cream in this part of Pennsylvania. They knew the Kaufmans for whom FLW had designed Falling Water which is about 30 minutes away. We visited it a number of years ago and it’s remarkable.

Kentuck Knob is much simpler but just as interesting. The Hagens initially intended for the house to be sited on the overlook shown at the top of this post. But as usual FLW had a different idea!

He sited the house up against the knob which is to the left in the picture. below. 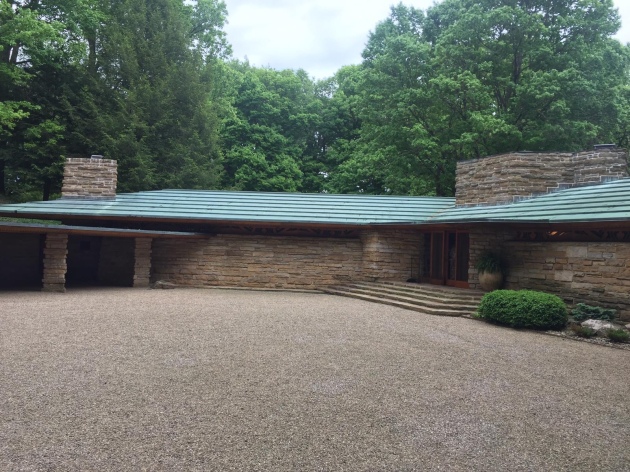 You can see in this view from on top of the knob just how the house is integrated into the knob. 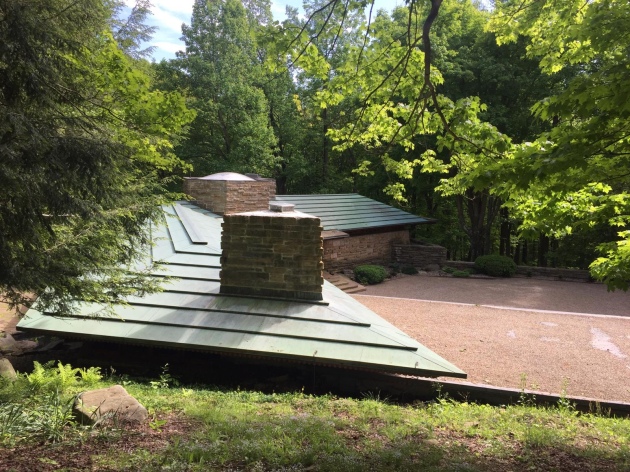 The chimney at this end of the house serves a fireplace in the master bedroom. The central chimney is at the core of the house. The public areas are to the right of the front door while the private spaces (3 bedrooms and 2 baths) are to the left.

As with all FLW houses, he designed every detail including built ins and furniture. We weren’t allowed to take pictures inside but this one of the light post gives you an idea. 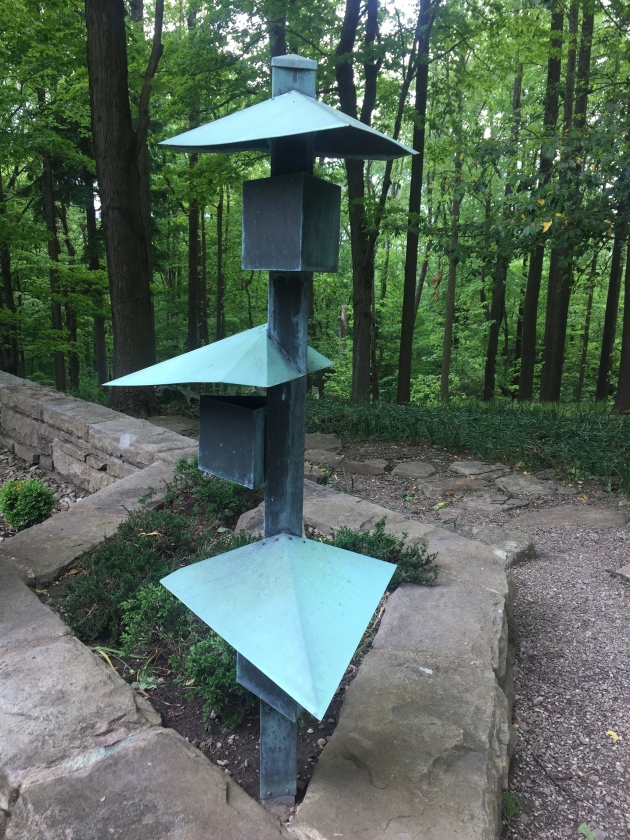 The Hagens paid extra (about $5000 in today’s dollars) to have FLW sign his design. The red square tile with his signature is right at the front door. 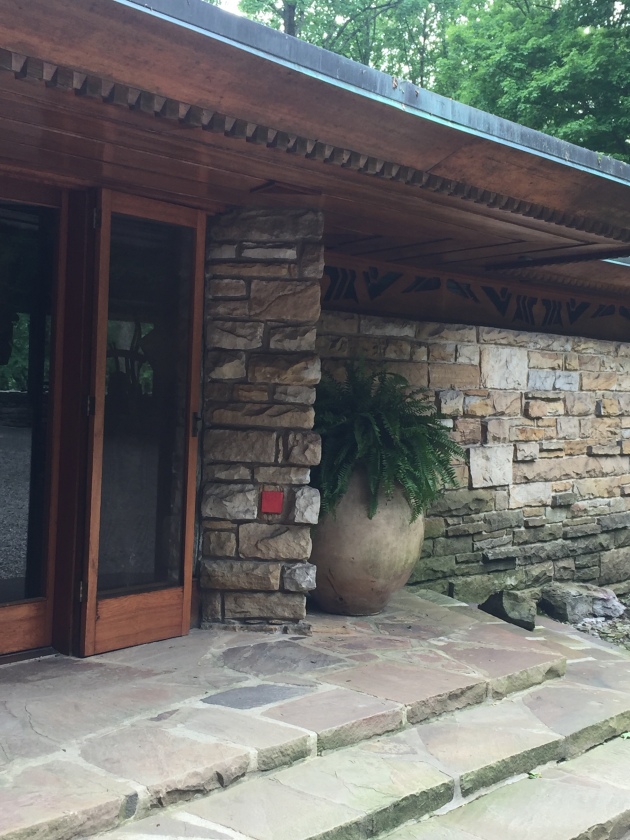 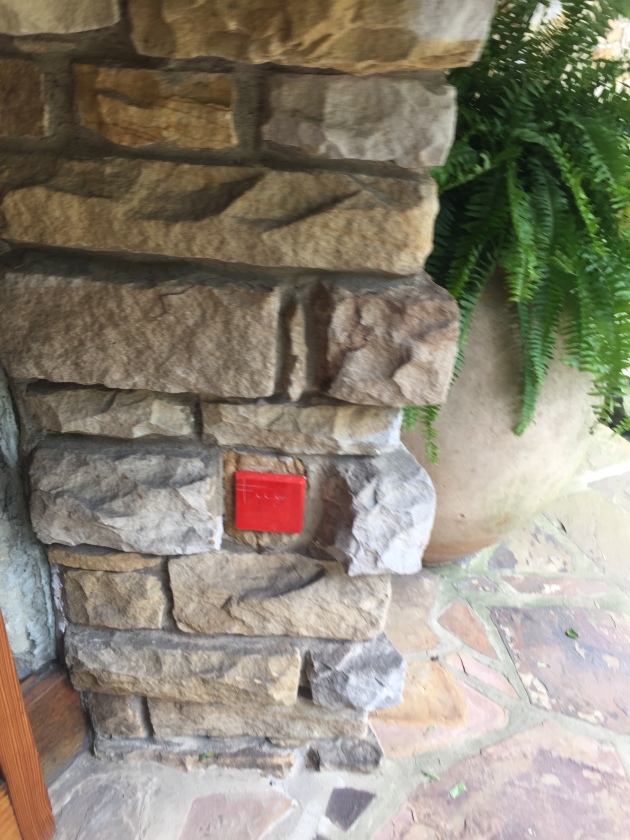 Of course as with all Wright designs, the carport and the rest of the house was built to human scale-as long as you were no taller than FLW (5′-5″ tall). Needless to say I had to watch my head at all the low spots. Thankfully, he usually uses the low ceilings in corridors to contrast with higher ceilings in the living spaces.

The interior of the house is all wood or stone and really beautiful and from all the rooms the view is out across the Terrance and towards the beautiful woods.

The huge cantilever rood overhangs serve to shade the terrace and protect the windows from rain. According to our guide, they can leave all the windows open during a summer rain and never have to worry about any getting inside.

While no photography was allowed inside, it appears my phone accidentally took a picture in the kitchen. I am so glad this accident happened as it shows the stove which I wish Frigidaire would reintroduce. Each of the burners is self contained and folds up to provide counter space when not in use! In the picture below the kettle, red pot and yellow pot are on burners being used while one burner between the kettle and the red pot. 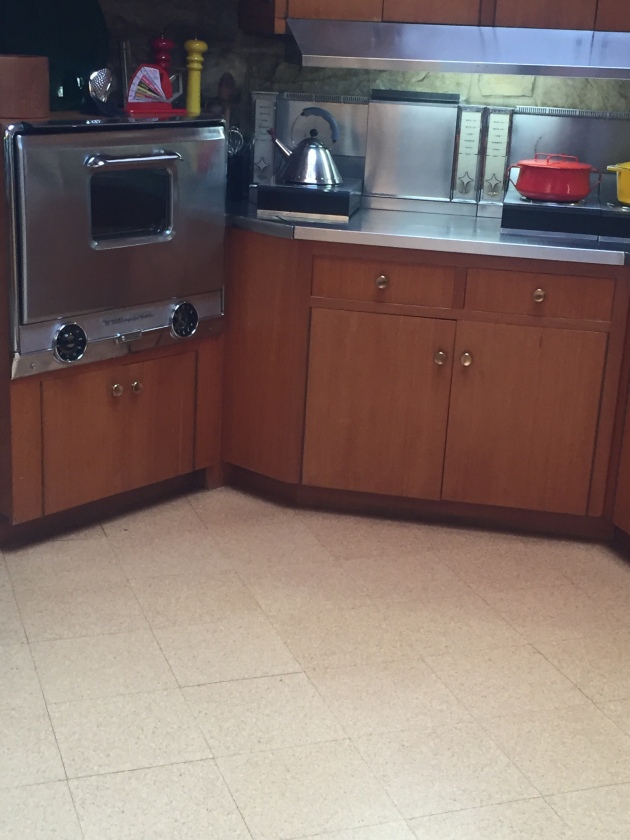 After our tour, we left the house behind and walked (guests are shuttled up to the house) back to the tour entrance through the woods where the current owner displays some of his art collection including a piece of the Berlin Wall. 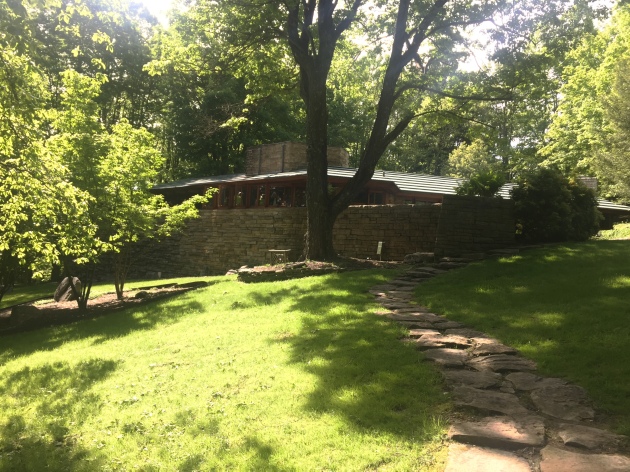 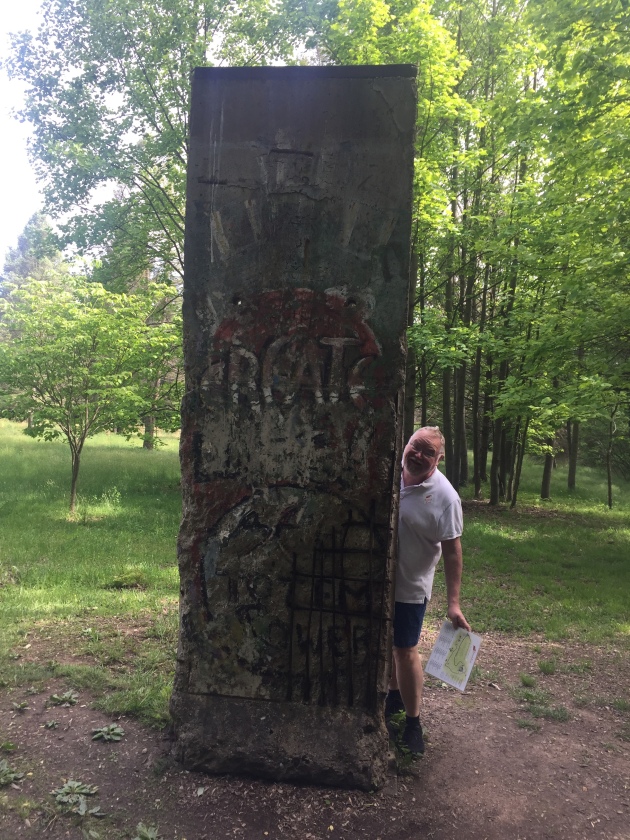 We had a tasty taste of Hagen Ice Cream at The gift shop and then found our way to the Hampton Inn about 20 minutes away.

Tomorrow we are off to Columbus.