After the wonderful breakfast in Fort Augustus, we headed towards Glasgow via Glencoe and Loch Lomand. It was a drizzly day which added to the ruggedness of this part of the Scottish highlands. Glencoe is where the massacre of the Macdonalds took place at the end of the 1600s. 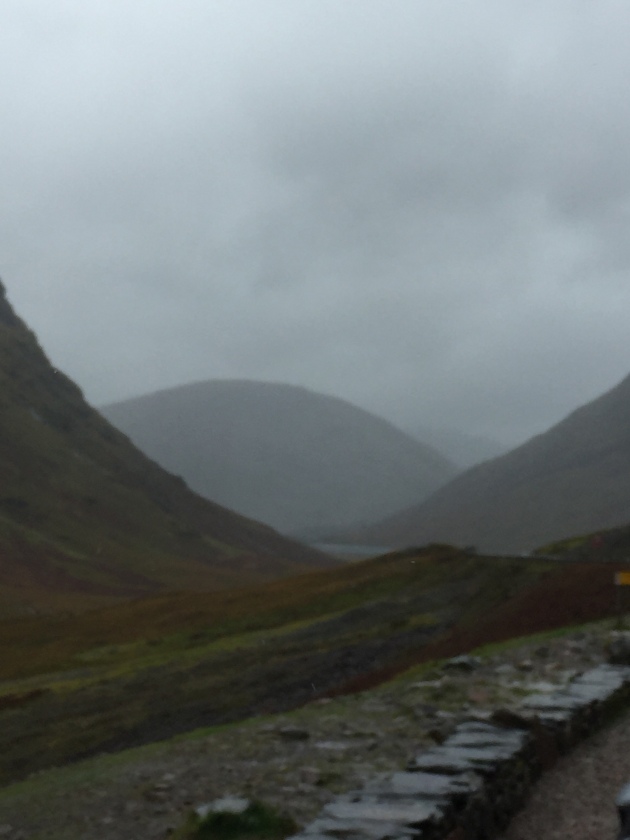 We stopped partway to Glasgow I give driver Jenny a rest from the tough drive (heavy rain, narrow roads & wide trucks) for a bowl of soup at a beautiful golf club. Of course there were golfers golfing in the rain but thy didn’t look happy about it! 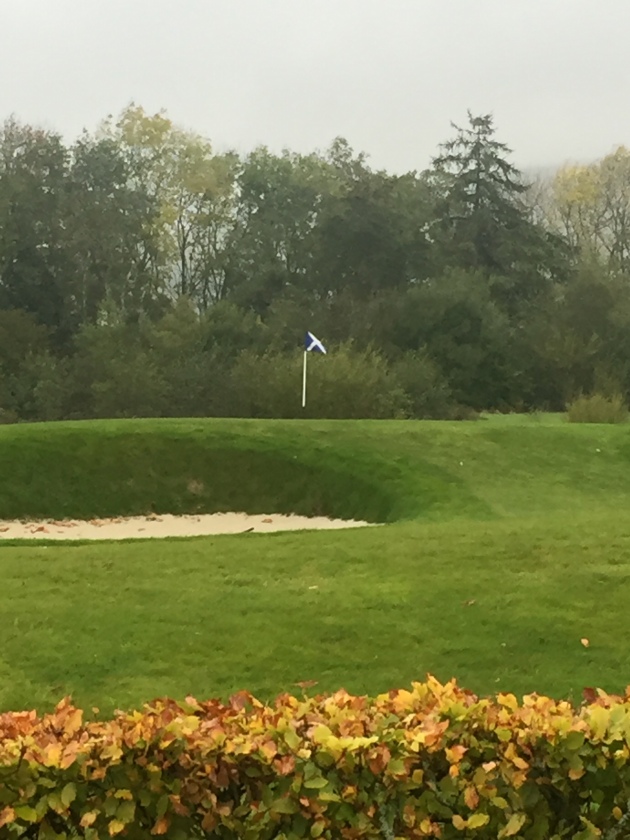 After arriving and checking in at our Bed & Breakfast in Glasgow we headed off to tea at the the recently restored tea room designed by Charles Rennie Mackintosh. This was one of four or six that the same hostess had in Glasgow. Apparently tea rooms were invented so ladies could go out in public as at the time it was acceptable for them to go to Pubs.

This tea room had been sitting unused and was slated for demolition before it was saved and restored. It was incredible to be sitting in the original interior (the picture at the top of this post is a detail from one of the panels shown in total in the 4th photo below) and the tea, champagne and cakes were pretty tasty too! And hard to believe how much china we used! 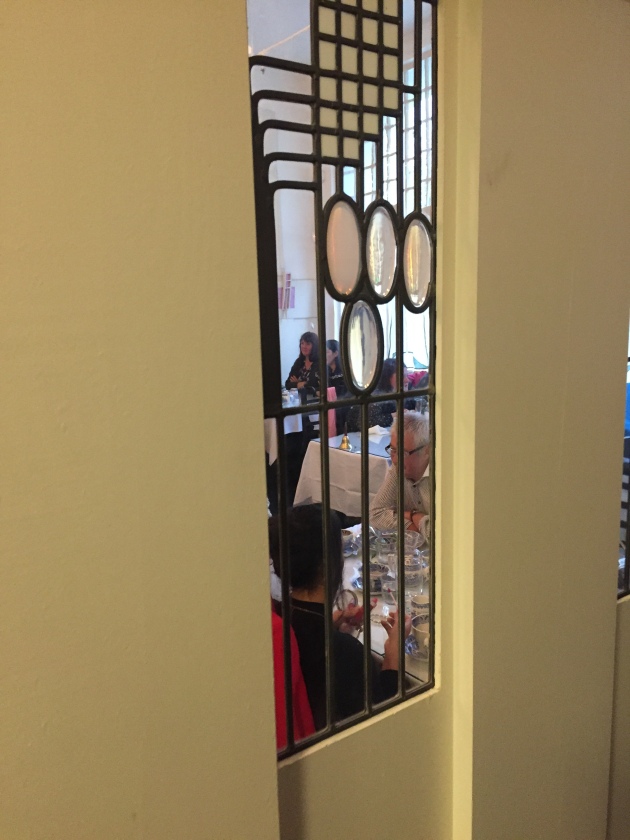 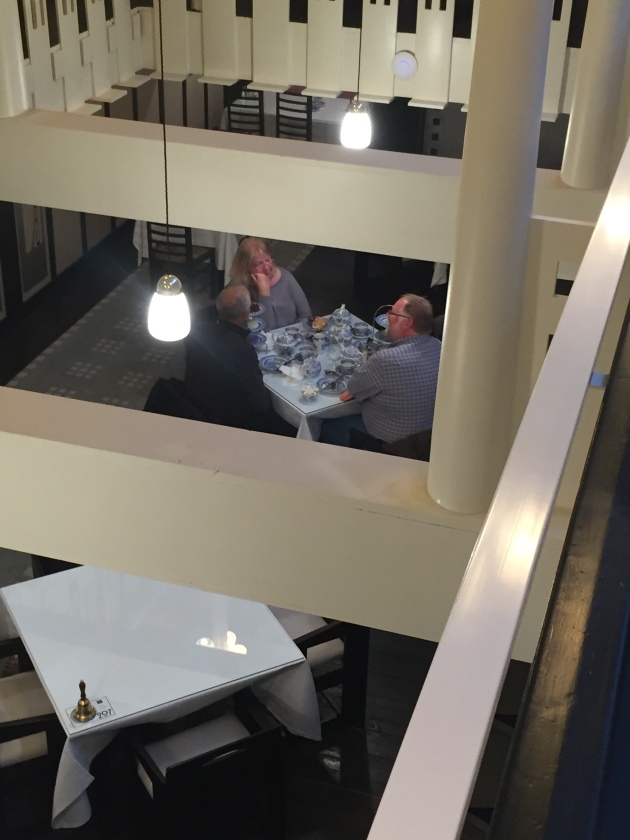 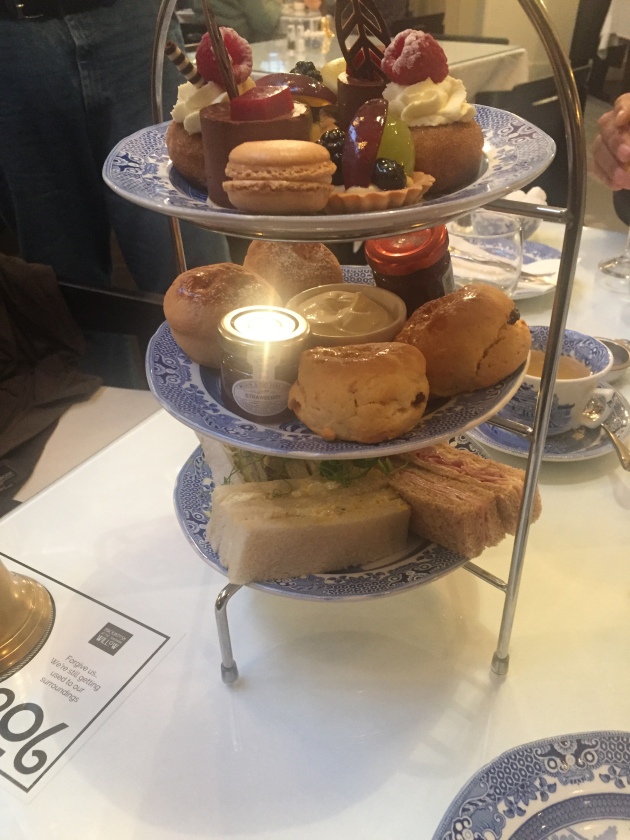 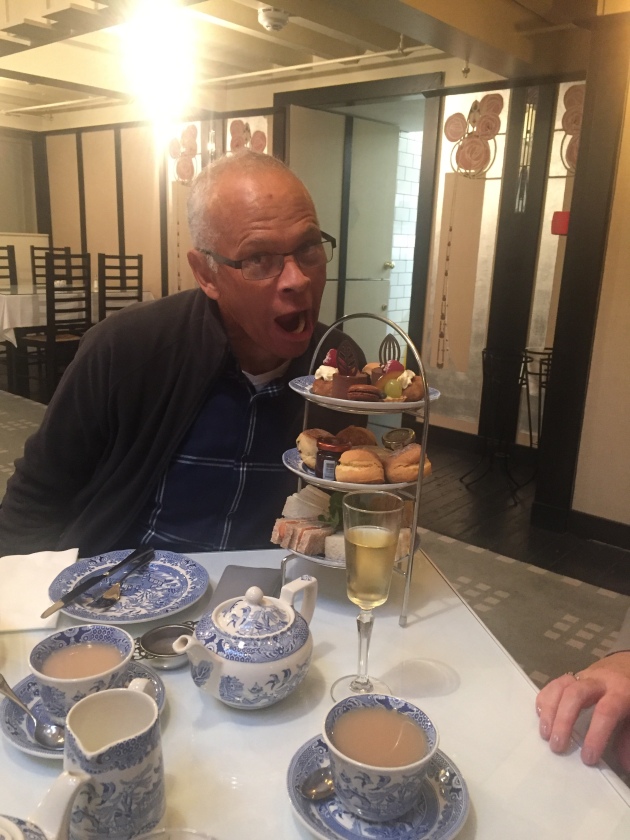 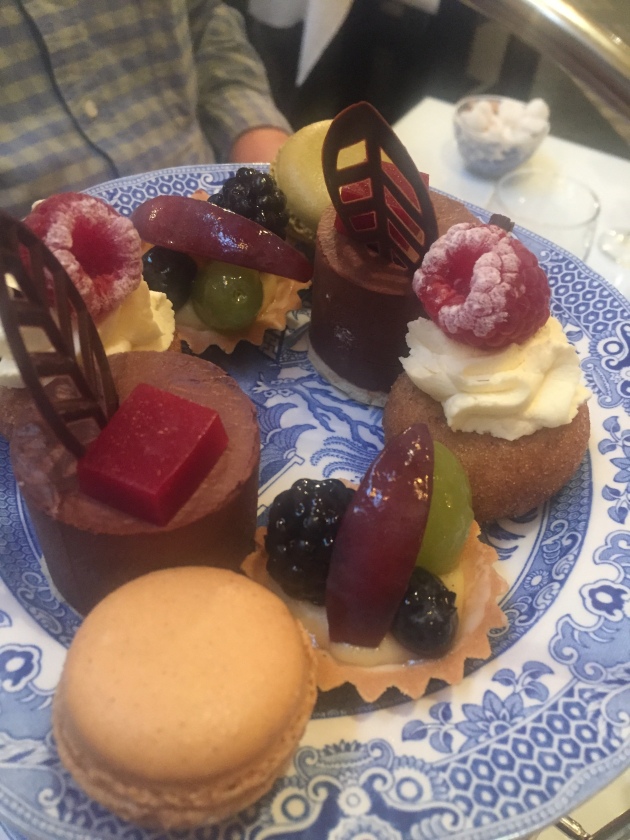 After breakfast (served in our room) the next morning, Mike and I walked to Kelvingrove Gallery. (Brian was feeling unwell so he and Jenny stayed at the B&B and enjoyed their suite.) The gallery was built as the main exhibition hall for the 1901 World Exposition held in this huge park along the River Kelvin. It is now a museum that we really enjoyed. It addition to the usual exhibits it had a number of interesting educational ones. We particularly liked the one showing how paintings are restored. They used a painting and showed it in the various stages of cleaning 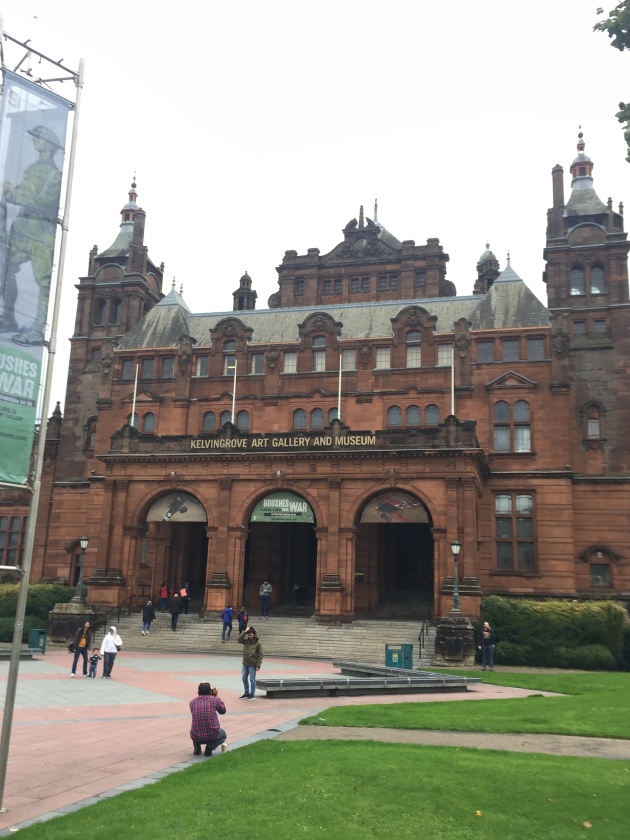 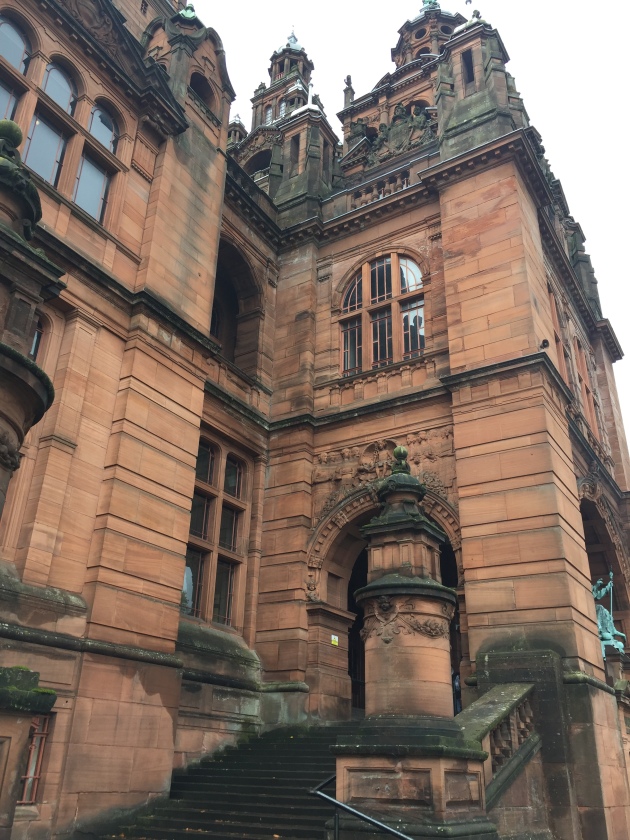 The building houses a pipe organ and everyday at 1pm there is a concert so we enjoyed sitting and listening. The gallery is free and so it is well loved including by some cute kids who while not sitting were definitely enjoying the concert too. 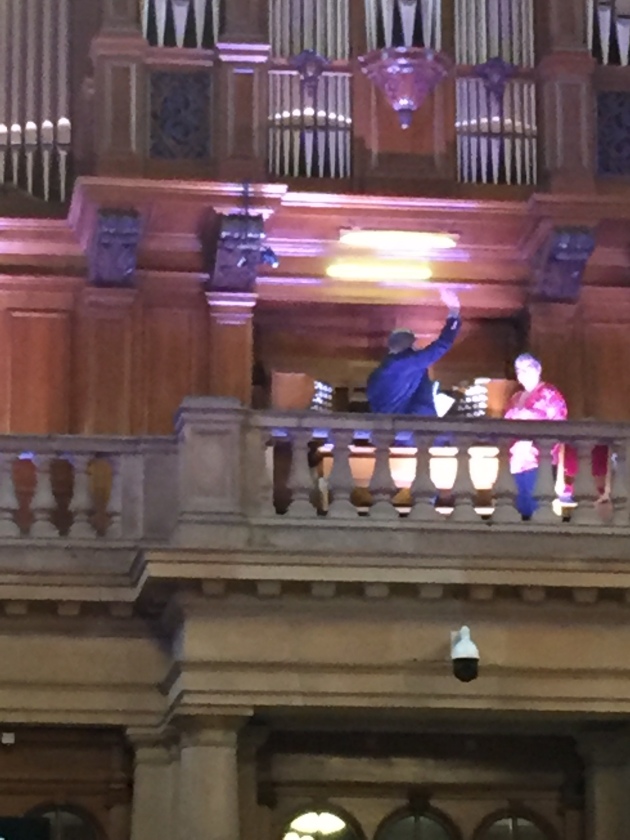 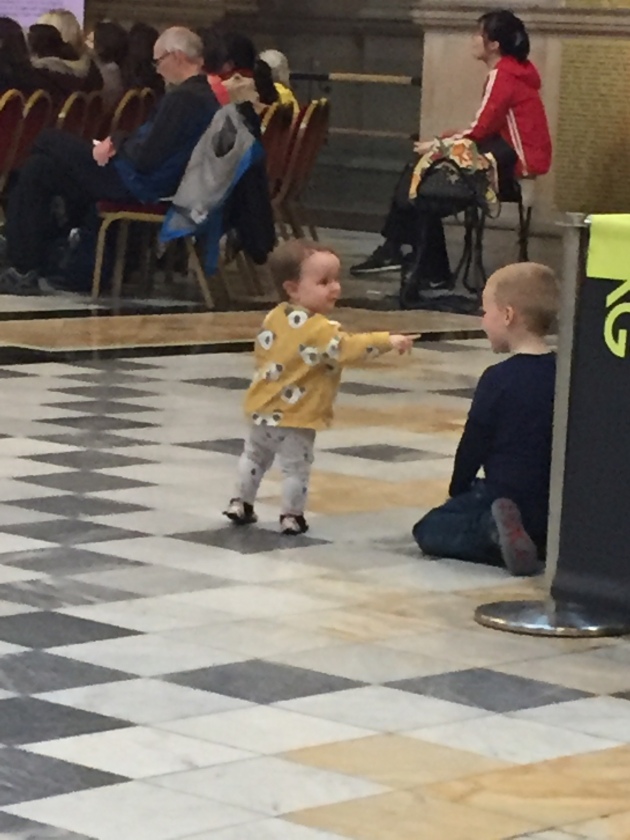 While there are several masterpieces (Renoir, Monet, and Rembrandt) in the gallery the highlights for me were the section devoted to Mackintosh (and the other art nouveau architects, painters and designers) and Dali’s Christ of St. John of the Cross. It is incredible. (Photo credit to Wikipedia for the cross) 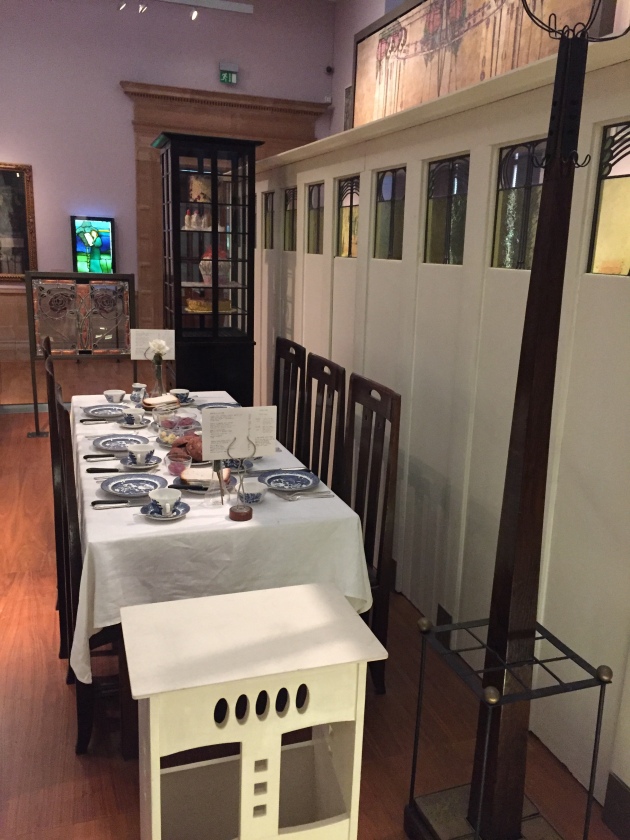 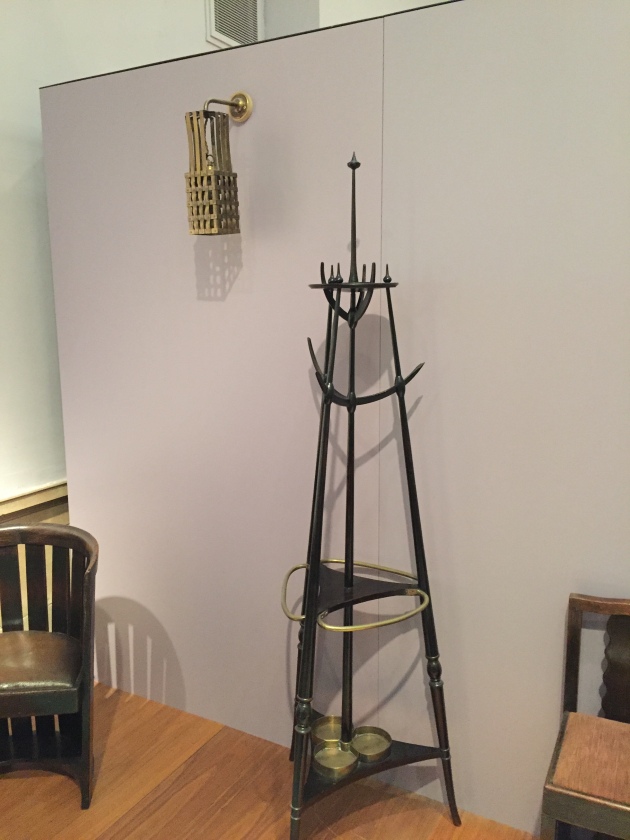 We spent almost all day exploring this wonderful museum and returned to find Brian somewhat improved, at least enough to join us for dinner at Sisters where Jenny had purchased a voucher for their pre-theatre dinner. It was a cold and rainy night so we all had the delicious leek soup as a starter. For our mains, Mike and I both had ham, mashed potatoes and cabbage and kale-Scottish comfort food! For dessert I of course continues my sticky toffee pudding tasting and was not disappointed.

Next morning after breakfast we said a sad goodbye to Jenny & Brian as they headed home to Aberdeen and their four footed family and we boarded the train to Edinburgh. We were so lucky to have met this warm couple who MADE our visit to Scotland. Whether showing us around, feeding us or simply letting us relax at their beautiful home it was all just magical. We hope we will be able to reciprocate their hospitality sometime in the future!