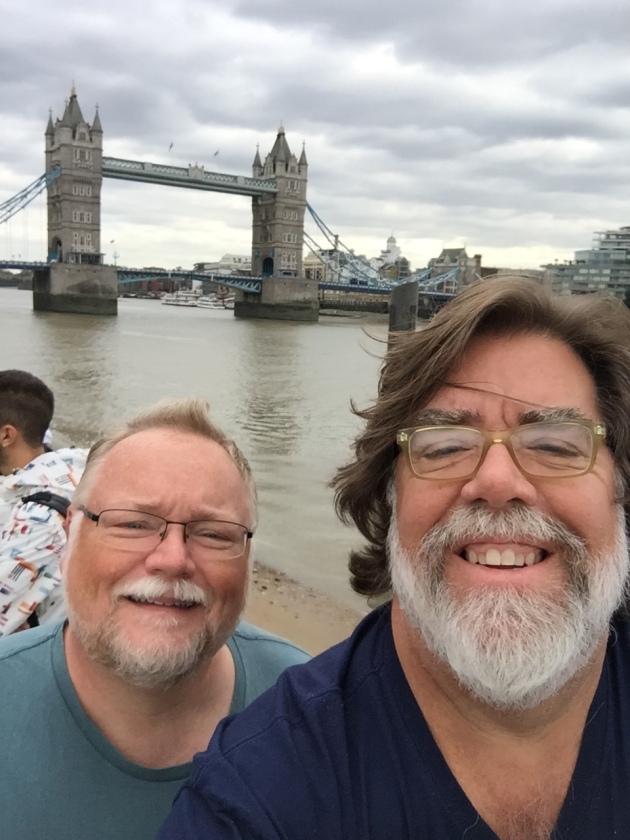 We’ve had a fun four days in London. This was Mike’s first visit (other than at Heathrow) and my second and that was in the early 80’s so quite a lot of changes. We lucked out with beautiful weather. With the exception of yesterday when it clouded up and cooled off in the afternoon, it’s been sunny and perfectly temperate. We wore short sleeves the while time! Of course the Brits were wearing puffy jackets.

After our arrival on Thursday evening we quickly checked into our hotel and after a quick but expensive (that will be a recurring theme) takeaway Chinese dinner we went to bed. I had a bad travel day thinking I was coming down with the flu (fever/chills-nauseous, etc) but realized during our flight that a kidney stone was on the move. By the time we landed I was feeling fine albeit tired.

On Friday Mike got his first tube ride as we headed towards the Queen’s place for tea. The crowds TJ watch the changing of her guard were huge so poor Mike mostly saw the back of people’s heads.

It was fun to hear the band place a Stevie Wonder tribute though after having seen them honor Aretha we were worried Stevie had passed, thankfully that wasn’t the case.

We then were welcomed along with a few thousand of our friends into Buckingham Palace. It makes the palaces in St Petersburg look so bougie! This place is the real thing! Sorry for no pictures but that was one of the best things about the tour. No pictures allowed (they hollered if they saw you with your phone even out) which meant it was a pleasure to walk around and not worry about someone hitting with their selfie stick or actually being able to stand in front of a portrait or piece of furniture and look at it instead of only seeing all your fellow guests fighting to take a selfie.

After we left the tour, we had a spot o’tea on the back porch. The tea was tasty as it was still a bit cool and the huge macaroon was delicious which at $8 it should have been! We were however taken aback by the Queen’s new China! When I said to the cashier at the Royal Cafe that I need the China not the paper cup they were very apologetic. The manager even rushed over and explained that they serve 8000 cups on a busy day so they couldn’t. I guess they didn’t get my American sense of humor.

The lawn in the pictures above is where Liz has her garden parties in the summer. I bet they don’t use paper! LOL

We then walked from Buckingham Palace towards Westminster. Just before we got there we popped into Westminster Cathedral-the Catholic cathedral of London. It was built in the late 19th/early 20th century in a Byzantine style (to contrast it to the typically gothic Anglican churches).

We popped into a pub for lunch. As usual we halfed and halfed a fish & chips and a meat pie. Delish 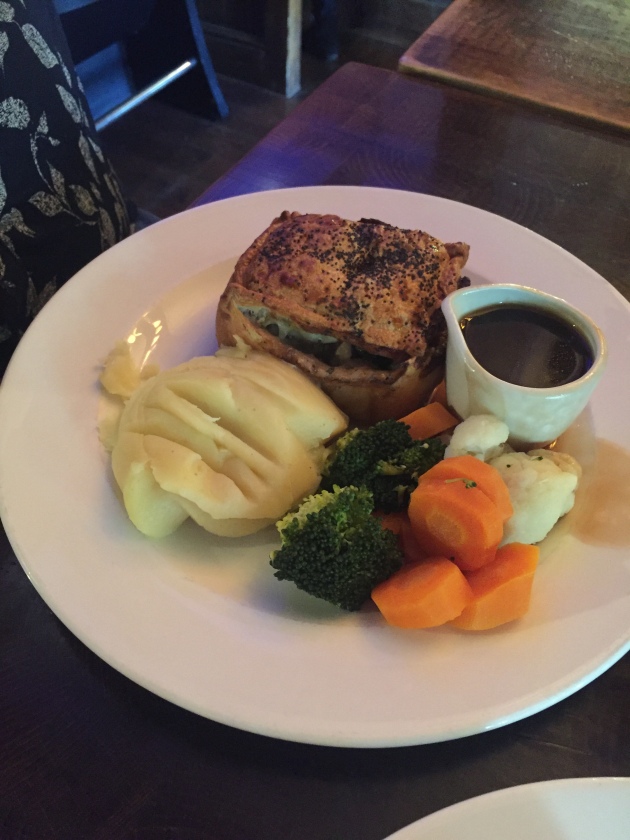 We got to the abbey (think Big Church not a lil Abbey) as it was closing for tourists which didn’t bother us much once we found out it was $26 dollars (each!) to go in. 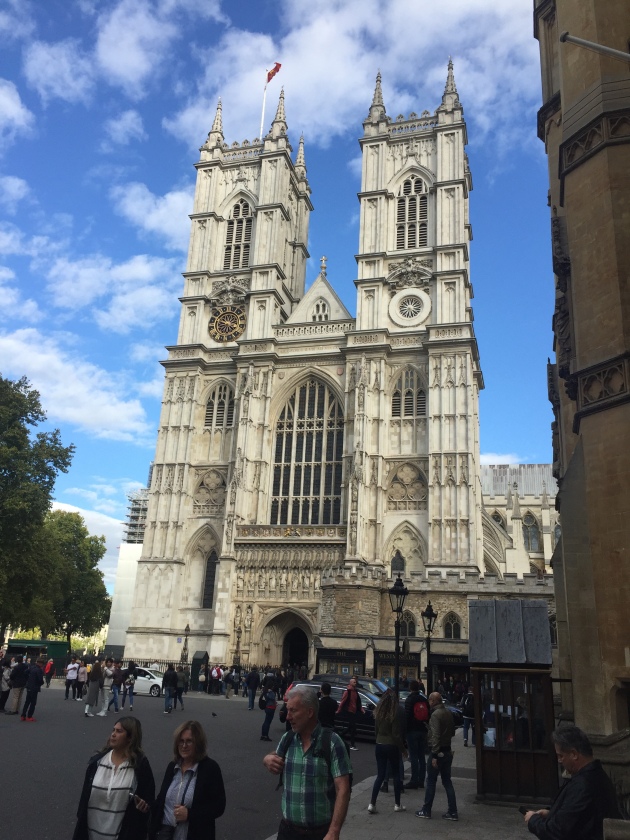 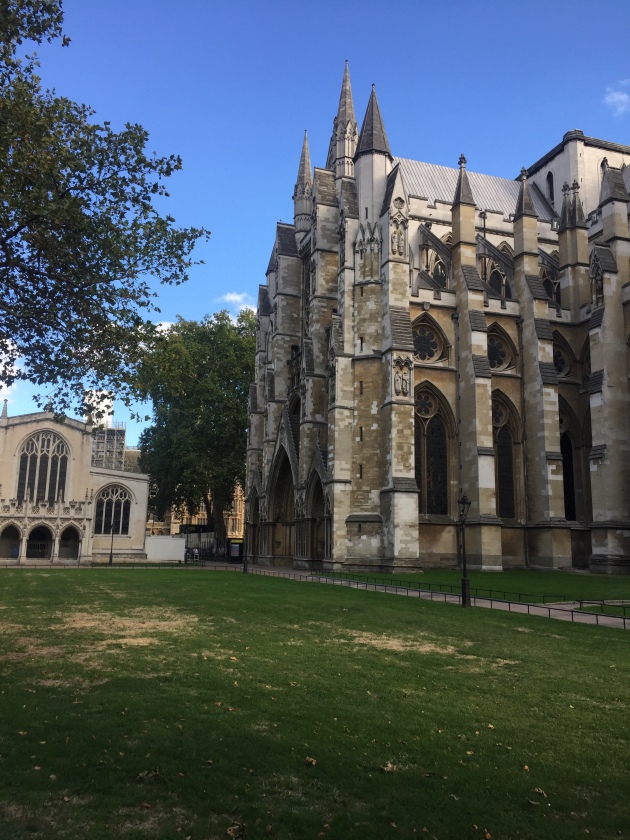 While walking around the exterior we saw their schedule of services and saw they had Evensong starting in an hour. So we decided giving an offering would be a better of our money (and be much less!) and we would get to hear music. So we walked over to Parliament where we couldn’t see the tower which holds Big Ben for all the scaffolding nor could we hear Benjamin as it is also being restored-at least they keep the clock visible. Oh well, something for our next trip. 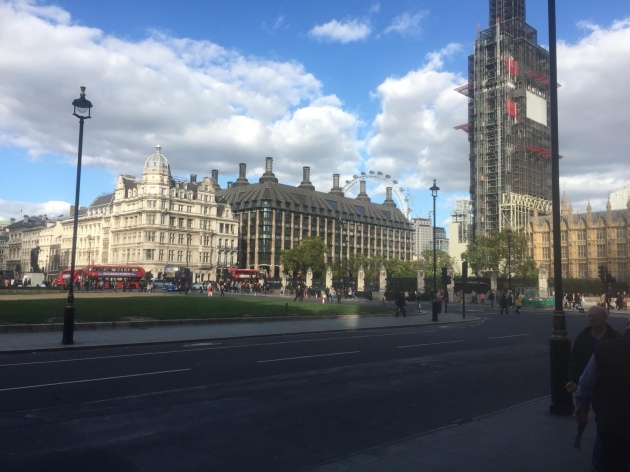 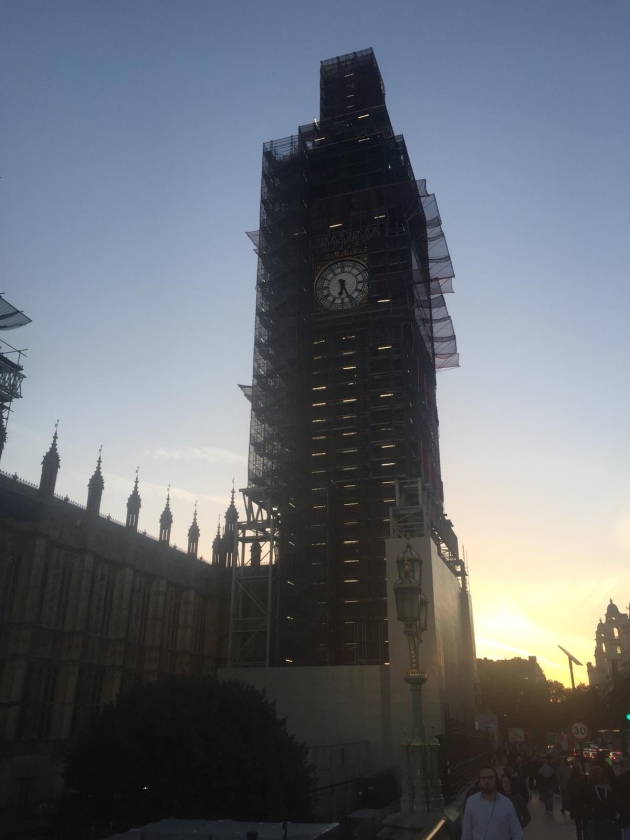 Evensong was a great way to experience Westminster Abbey and we highly recommend it! I did pull out my camera when I used the facilities off the cloister. Not as grand as the one in Belém but equally lovely.

Evensong was a full service with as many priests and deacons as our church in Charleston had for midnight mass at Christmas and waaaay more incense. The choir sang and we got to hear the pipe organ from our seats in the transept. We also got to see David Hockney’s new stain glass window designed on the iPad. It had just been installed and will be officially unveiled by the Queen next week. Wonder if she will like it?

After the services we walked to Trafalgar Square and along Victoria Embankment on the Thames before buying some prepped food at Tesco and heading back to the hotel.

On Saturday we slept in and then met our cruise friend Marie (and her cousin Marie!) at Westminster pier where we boarded a tour boat for the hour ride to Greenwich. It was great day-sunny, warm for the most part. Seeing the buildings from the river was a great way to see London. 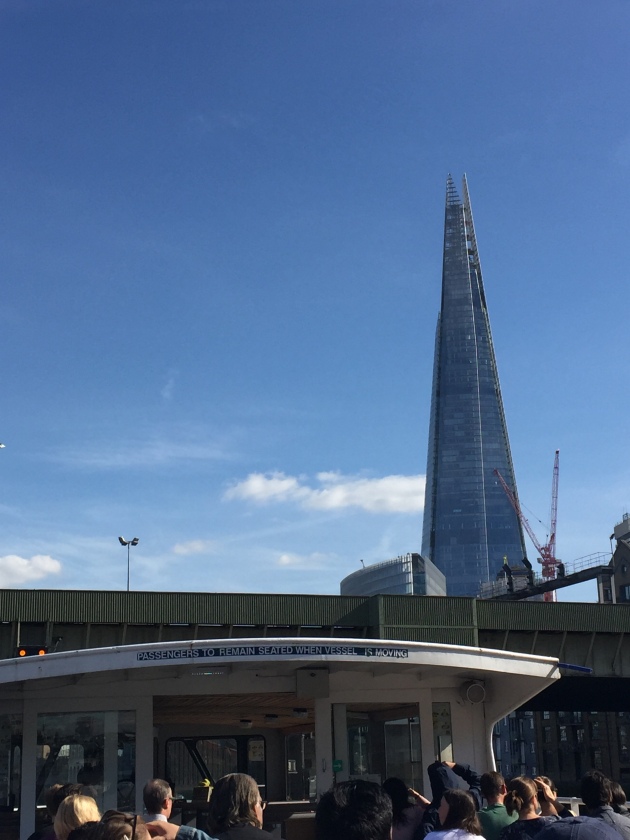 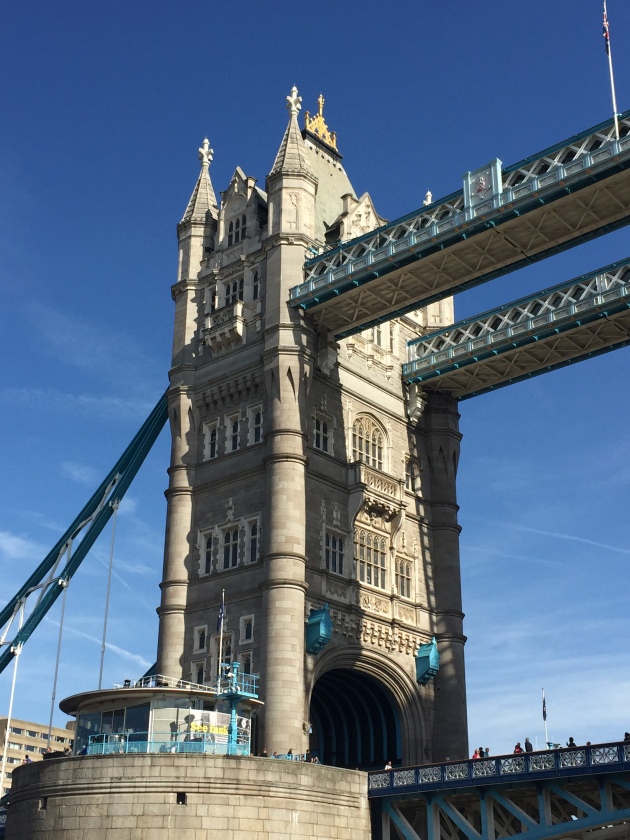 While in Greenwich we strolled the grounds of the Old Royal Naval College which was designed by Christopher Wren (the domes were supposedly practice for St. Paul’s larger version). 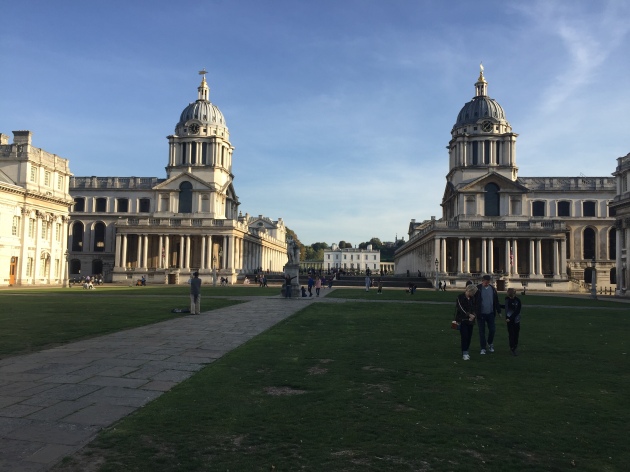 While there we happened upon a wedding and had a good laugh watching two flower girls blow off some steam while the rest of the wedding party had their pictures made.

After a wander around Greenwich (we didn’t climb to the observatory where you can straddle the prime meridian-next time) we joined lots of Londoners in the garden of a pub where we had beer (duh) and fish & chips (duh) and Bangers&Mash. 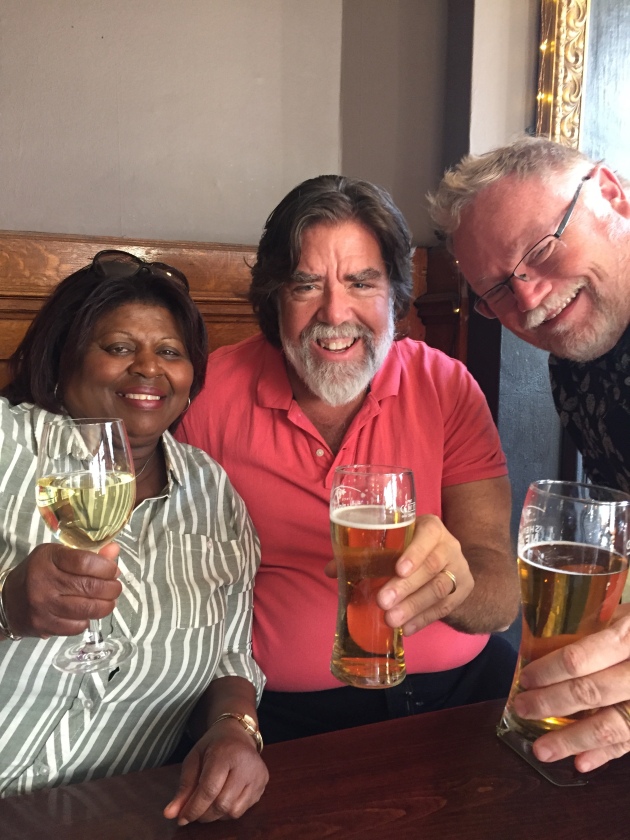 Yesterday we visited the Tower of London, walked across (well halfway) Tower Bridge (unlike the folks doing the charity bridge walk for Diabetes across 13! bridges) and then rode the iconic route 15 red double decker bus to St Paul’s Cathedral. 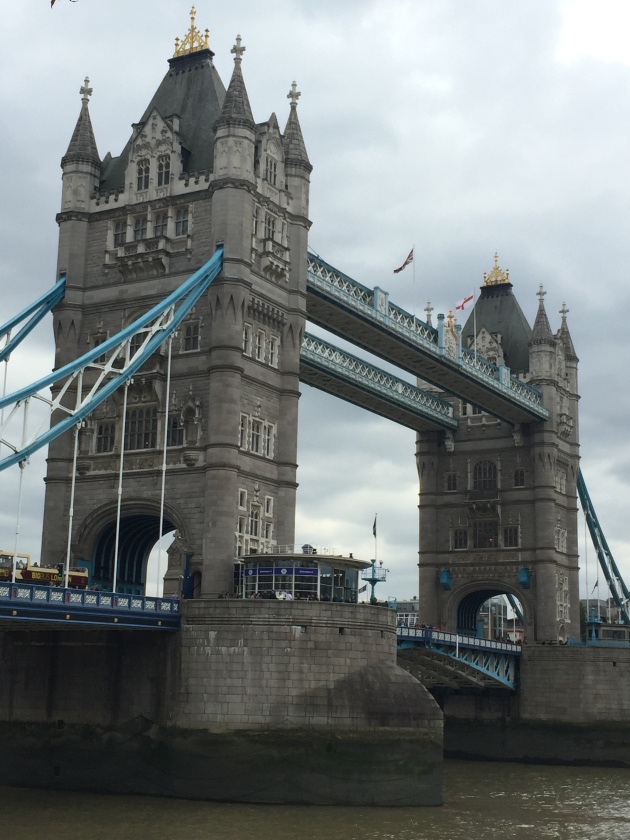 We happened into All Hallows’ Church at the Tower-interesting little church built originally in the 16th century it was all but destroyed during WWII but had been restored…apparently a relative was the priest who led the effort! William Penn was baptized in the church in a font that used to be covered by the beautiful carved cover. (The actual font is now in Philly). 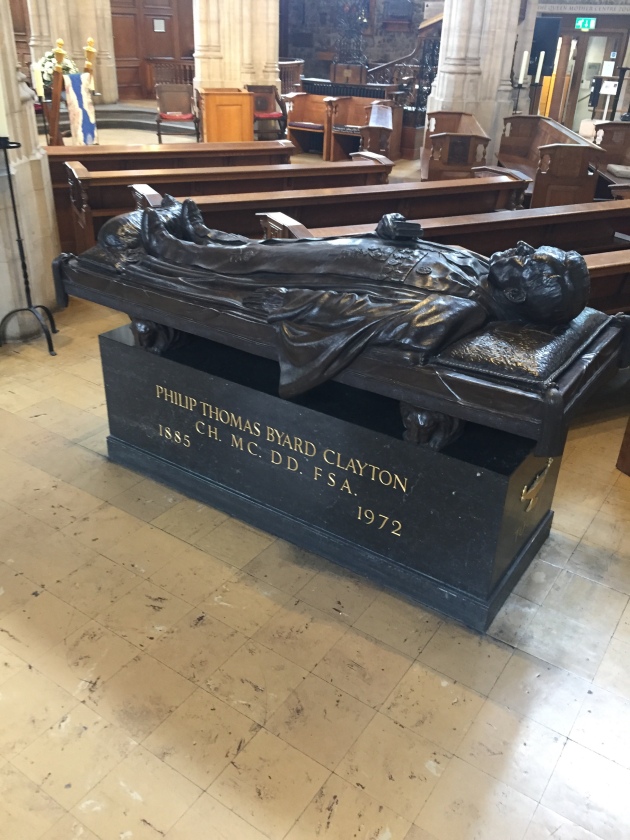 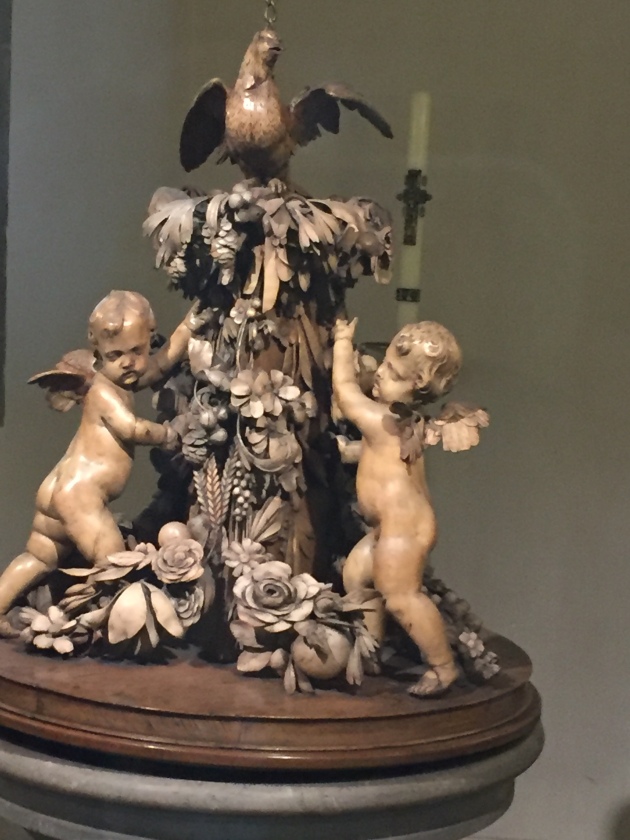 We are now waiting to board our short flight to Aberdeen. We did have London’s version of Voodoo donuts before we left. I like Voodoo’s bacon maple better than Doughnut Time’s honey caramel one.

All in all a fun time in Londontown. Continued to be amazed by the juxtaposition of old and new architecture 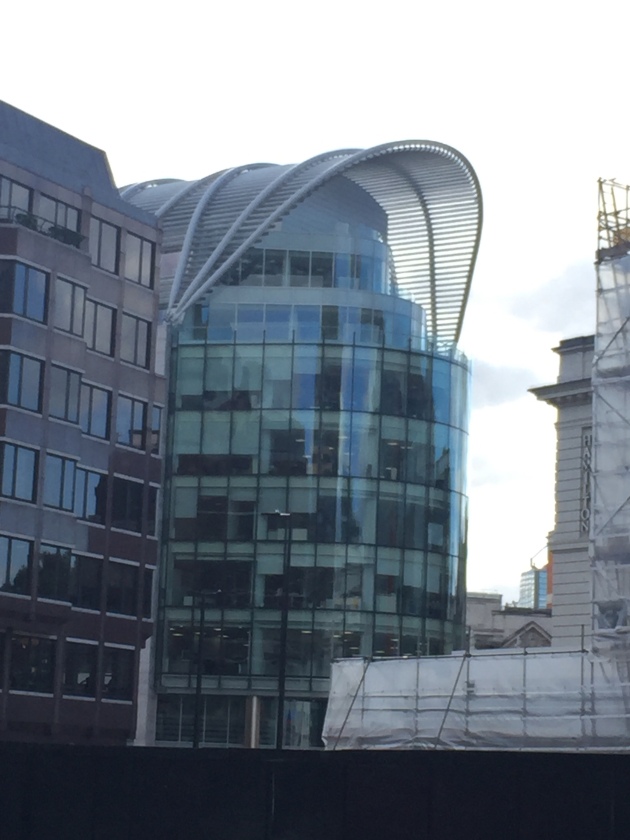 We also got a laugh from the sign at our hotel. Apparently self service waffles are new here and folks don’t understand how it works!

As an architect I wish we quit calling our mop rooms janitor closets and started listening to the Brits. Seems much classier!

We are aboard our Flybe plane-next stop Aberdeen!