Oh it was so nice to finally see sunshine this afternoon. Unfortunately the predicted 40% chance of rain between 10am and noon became 100% about 11:30. But we didn’t let it ruin our day. Heck we didn’t even let the fact that we weren’t allowed entry to the two churches we wanted to visit stop us.

We left the hotel after another delicious breakfast (danish pastries are REALLY good!) and rode the HoHo bus to its second stop, the Gefion Fountain. To quote Wikipedia:

The fountain depicts the mythical story of the creation of the island of Zealand on which Copenhagen is located. According to Ynglinga saga, the Swedish king Gylfi promised Gefjun the territory she could plow in a night. She turned her four sons into oxen, and the territory they plowed out of the earth was then thrown into the Danish sea between Scania and the island of Fyn. The hole became a lake called Lögrinn though tourist information about the fountain identifies the resultant lake as Vänern, Sweden’s largest lake, citing the fact that modern maps show that Zealand and the lake resemble each other in size and shape.

The fountain is quite impressive. We particularly liked the use of water to represent the plowed earth and the mist from the bulls nostrils. 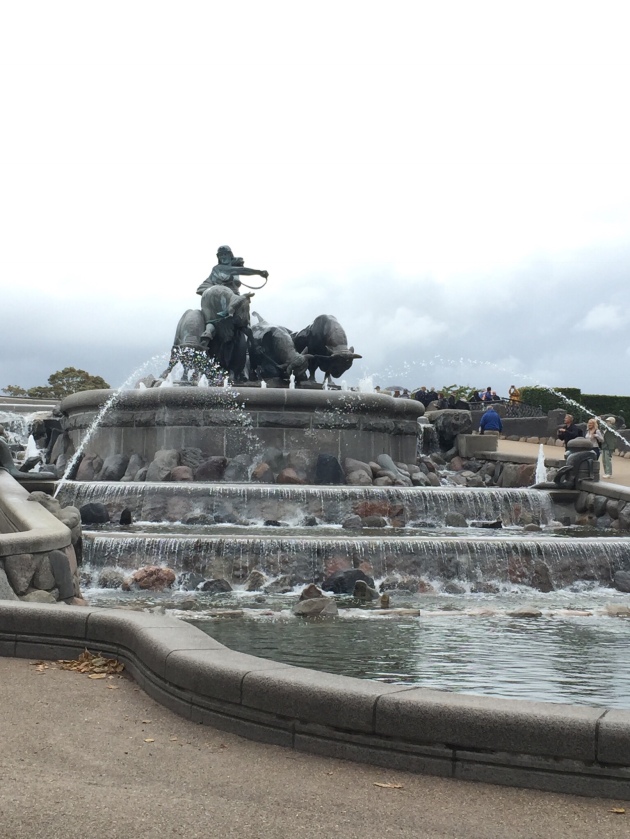 Nearby is the English Church which we had hoped to enter. Unfortunately it was closed for renovations.

We then walked along the flower and statue filled promenade between the beautiful park like grounds of an old pentagram shaped fort and the sea headed for the symbol of Copenhagen, The Little (and I mean really little, she is tiny) Mermaid (TLM). 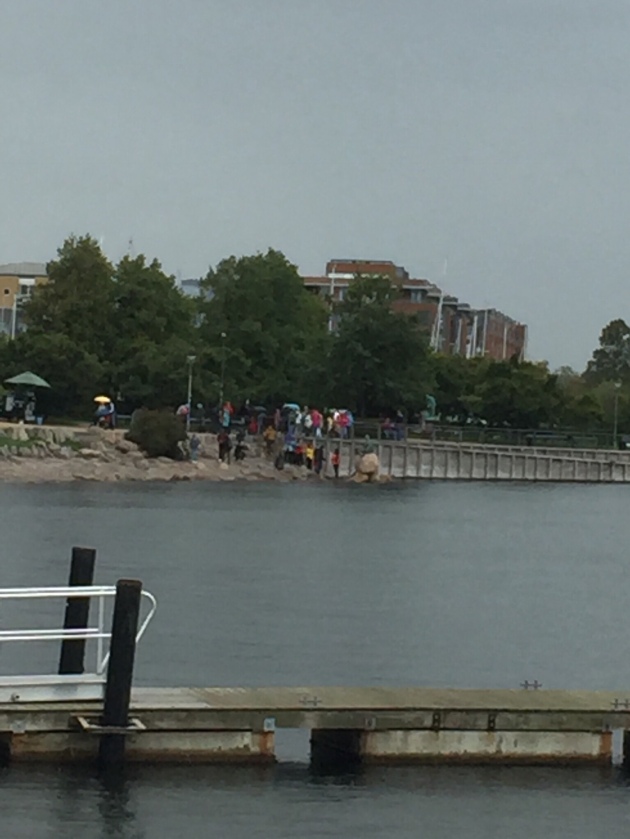 Just before we reached the hoards at TLM the light missed turned to a heavy drizzle and before we were in position to say hey, howyurdurin to TLM, the monsoon had started. Lois found shelter under the awning of a souvenir vendor while Mike and I joined others under some nearby trees. Of course neither of us had our rain jackets or mini umbrellas we’ve been toting since March….don’t it figure the first time we really needed them we wouldn’t have them? So I apologies for the dreary pictures below but if I recall Hans’ tale correctly about TLM it was pretty dark so I think these may be perfect. 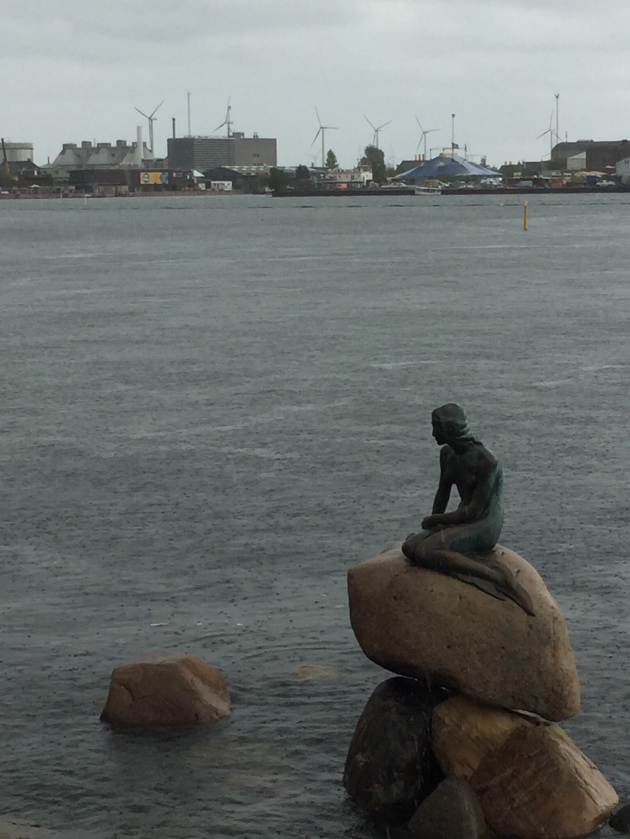 Here is one that I’ve digitally brightened up. 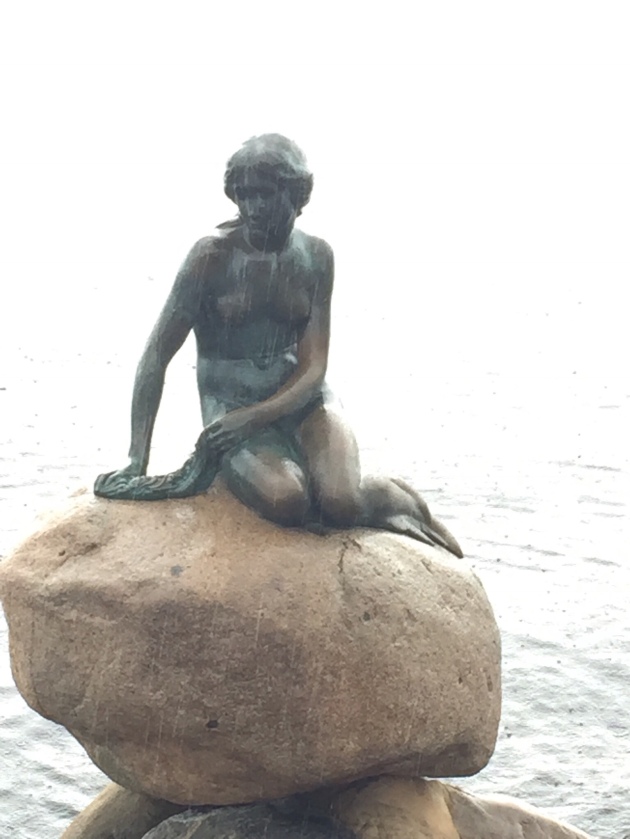 We jumped…ahem, hopped back on the bus and rode to the last stop which was near the central train station. Since this is Lois’ first trip to Europe we thought it important for her to experience a grand train station. On the short walk, we stopped in a restaurant for a warm up coffee (and comfort break). Alas after seeing the desserts we asked to see the food menu for this Turkish restaurant since no one liked my idea of having dessert here and lunch later! LOL

Lois picked a breakfast dish made of scrambled eggs, tomatoes, peppers and crumbled bread. It was very tasty and she LOVED it. “We ought to come back here and eat again”. Mike and I split a salad with feta, veggies, nuts with a pomegranate dressing and a sampler plate of Turkish meat and veggie filled pastries. I enjoyed all. Unfortunately dessert which had been what we all wanted to try was just meh. Doesn’t it figure! 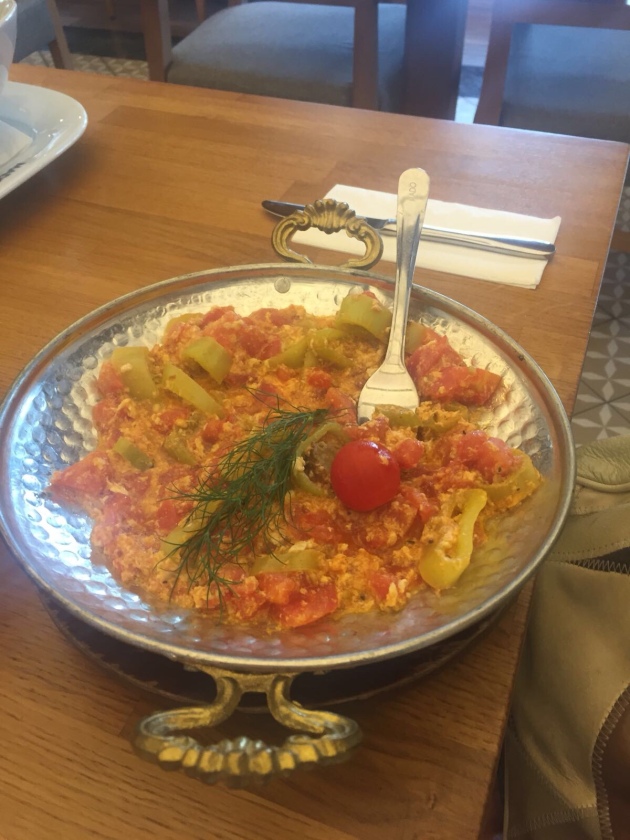 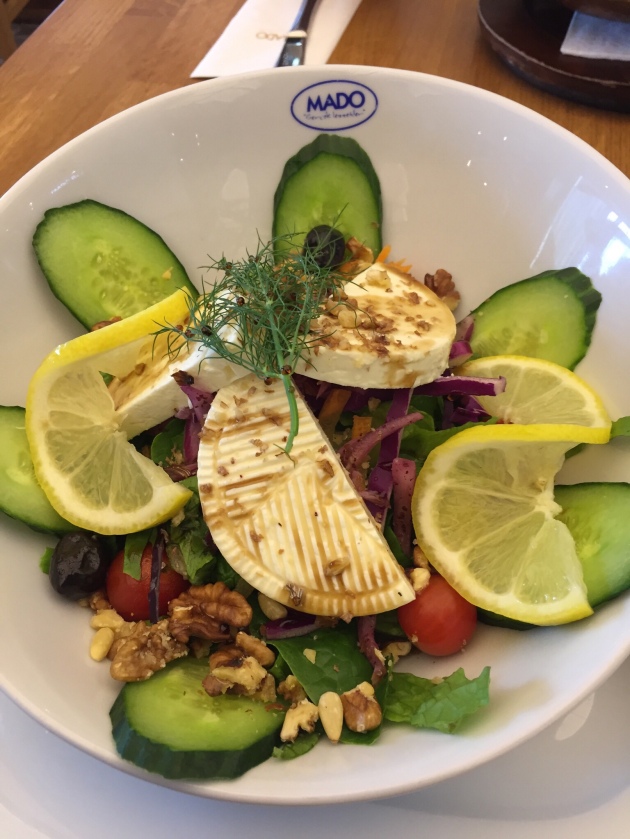 The train station was built in the early 20th century replacing a structure from the early 19th. It was renovated in the 1980s to add shops and such…I desperately tried to get a single picture with the big three US stores but could only get two at a time. Lois got lost in the 7/11 which was more like a Whole Foods. 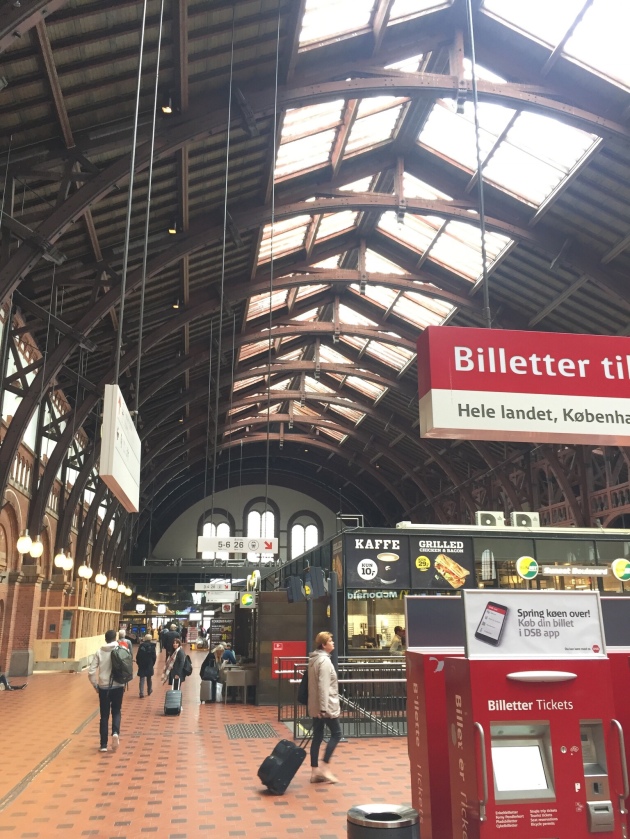 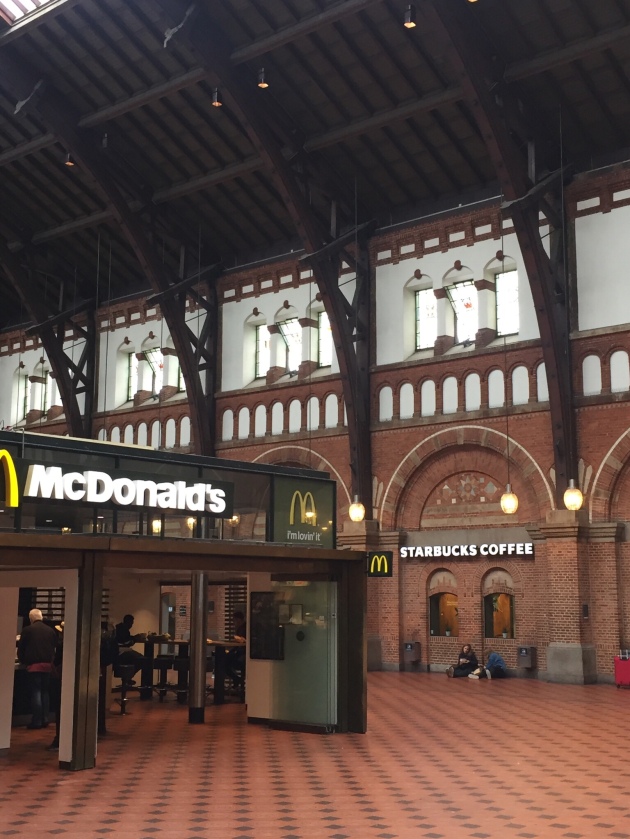 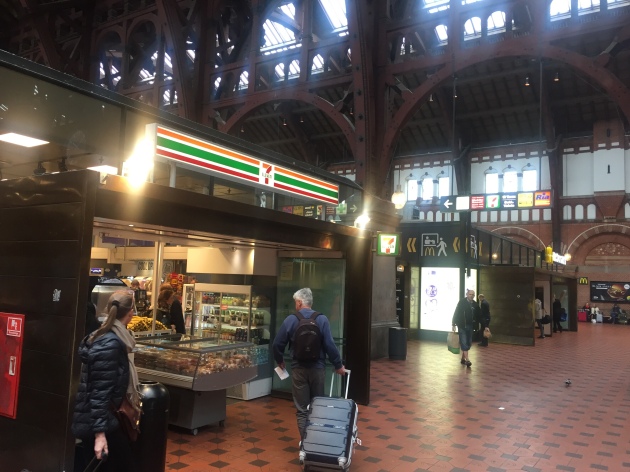 Copenhagen is a bicycle city and all the guidebooks talk about being careful I. Traffic, but it wasn’t until we saw the bikes parked at the station that we realize just how many there must be. According to the narration on the HoHo bus, 40% of commuting is done on bikes…I can believe it given this was the view on just one side of the train station. 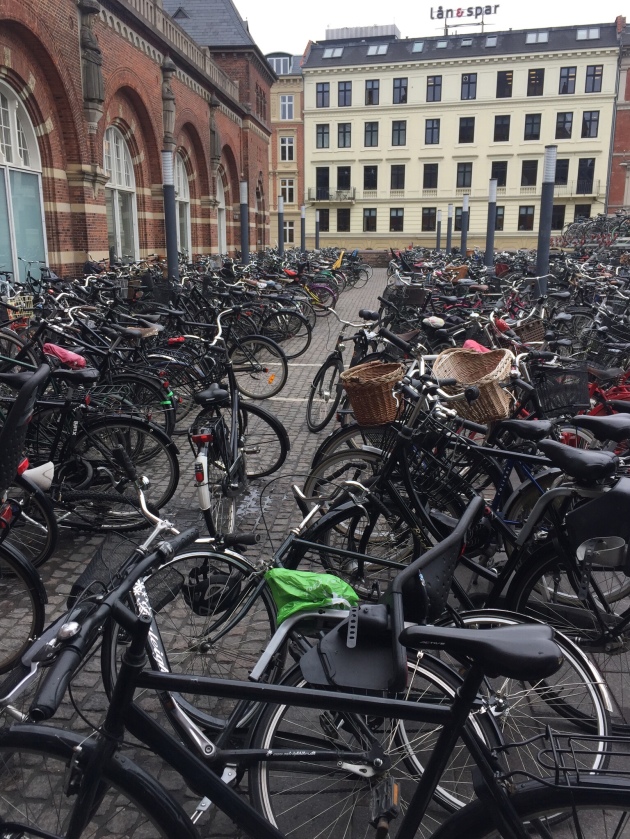 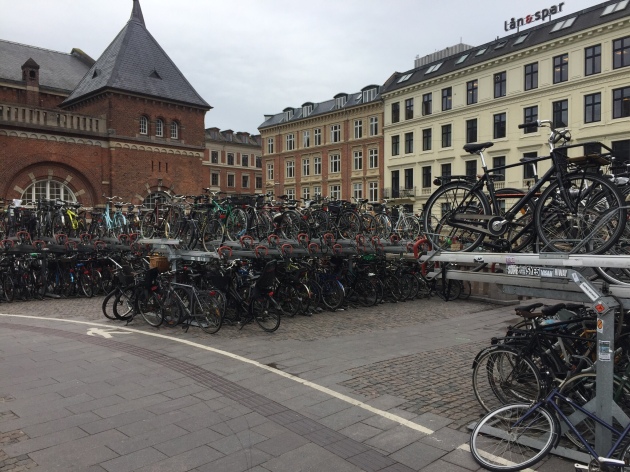 From the station we walked around the perimeter of Tivoli Gardens, Europe’s oldest amusement park peaking through the fence. Lois would like to ride some of the scarier rides so we may go back tomorrow and pay yo go inside. 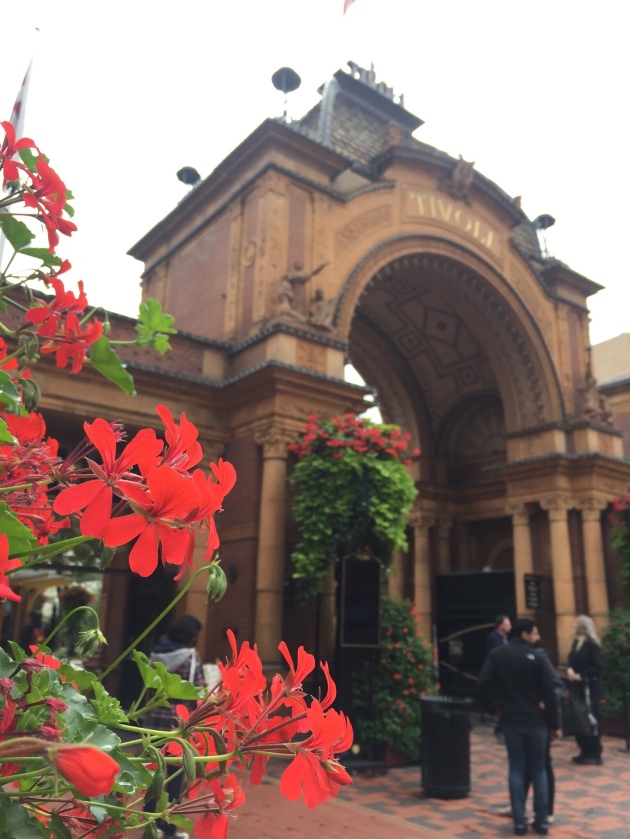 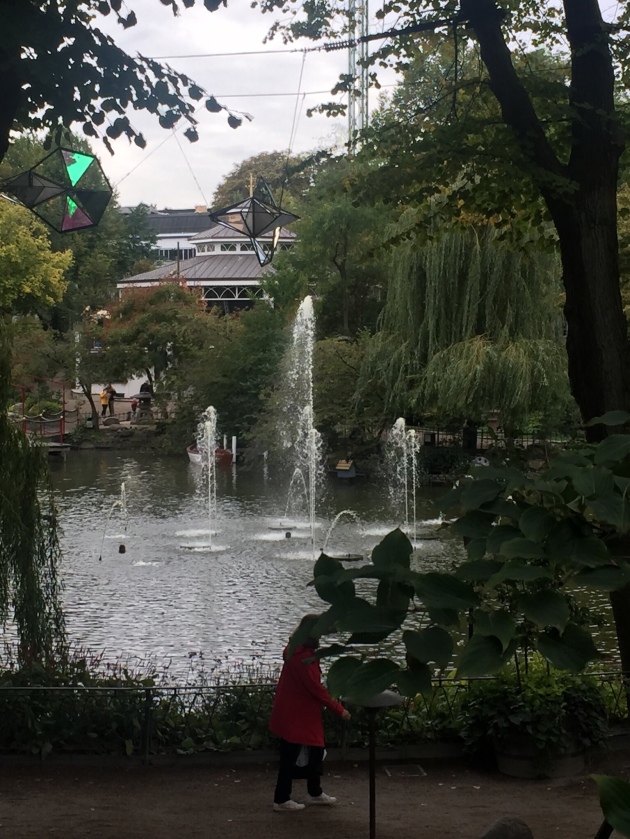 We then reboarded the HoHo and rode it to Christiana, a neighborhood which declared itself independent in the 70s and now which serves as the bohemian, artsy, and hemp center of Copenhagen. 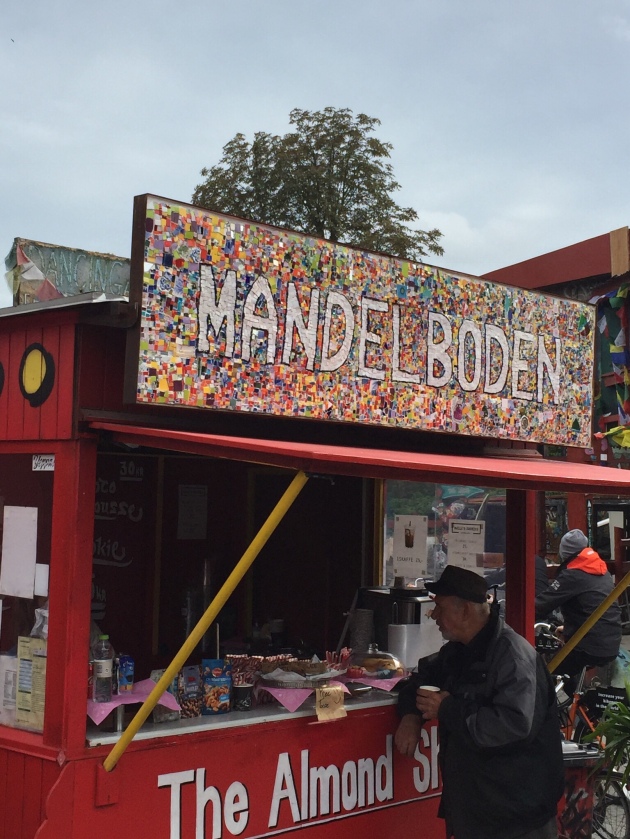 We had hoped to go in the Church of the Holy Savior which is adjacent to Christiana alas, it closes at 3 and although it was only 2:42, the doors were shut and padlocked. For the second time in one day we were locked out of a church! So much for ” welcome, rejoice, and come in” 😢. While none of us wanted to climb the 400 exterior steps of the spiral steeple (which can be seen all over the city) I had wanted to get inside since this is the first Church I’ve seen with all clear glass windows…maybe tomorrow. 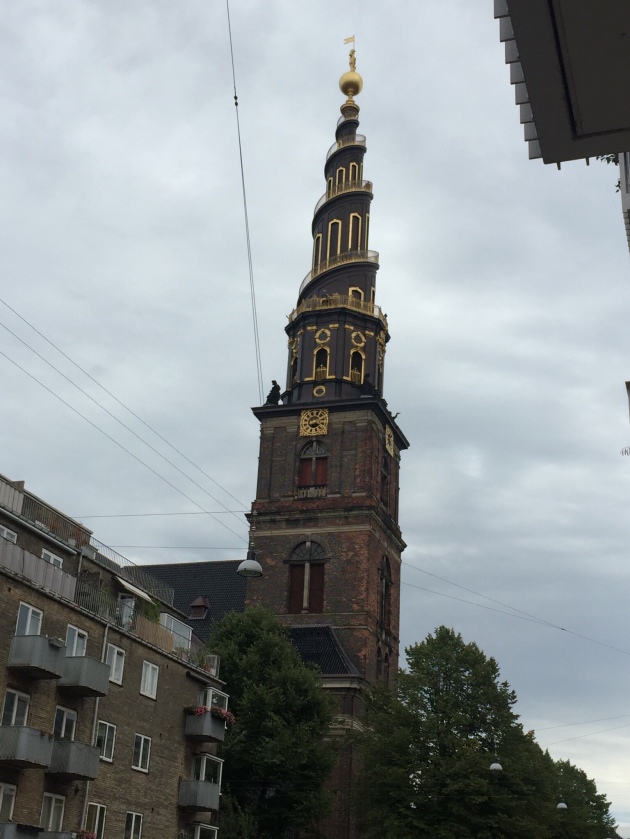 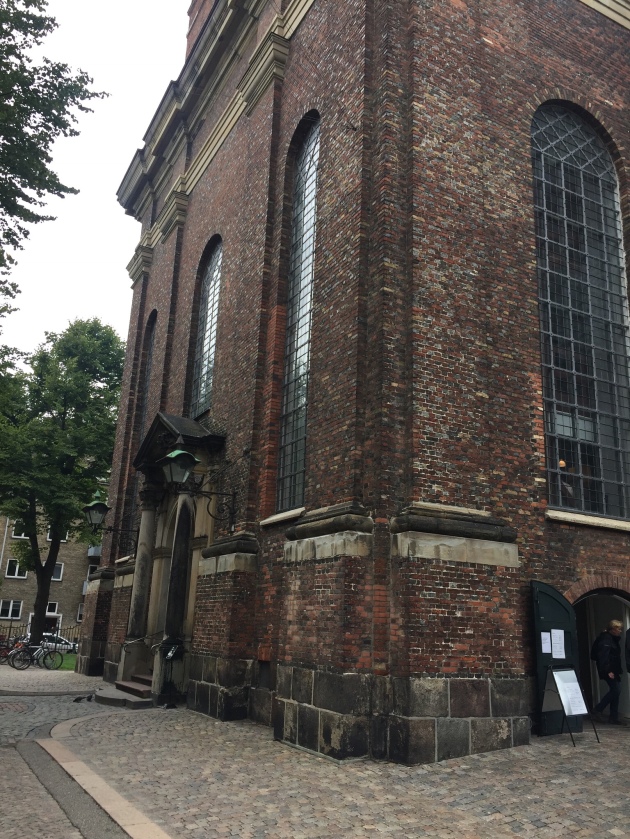 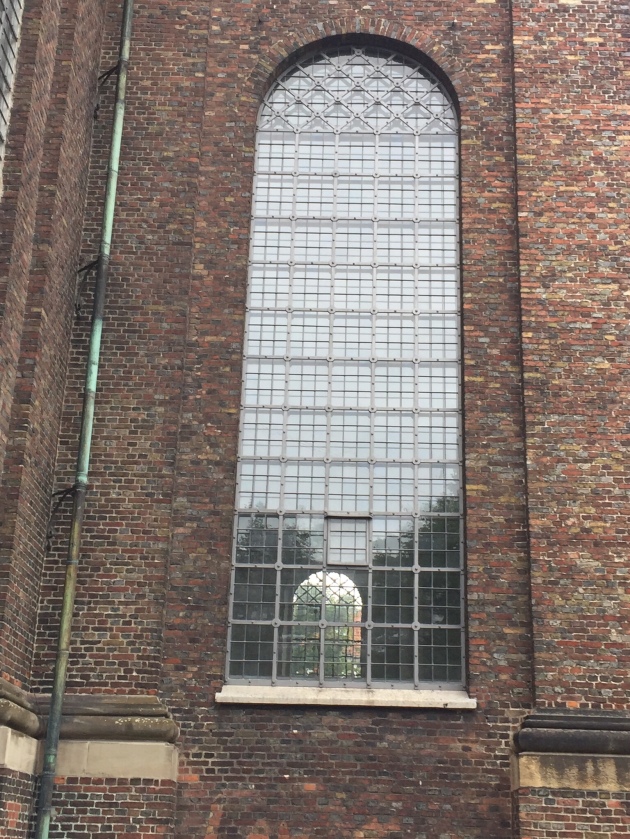 We then walked back to our hotel using a really cool bike and pedestrian draw bridge across the Copenhagen River separating Christina from Nyhavn. In addition to its interesting architectural design it’s also an engineering marvel. Rather than the draw going up to allow tall boats to go through it, the bridge splits and the sections move on rails towards the shore to create the opening. I’m hoping to see it in action before we leave but here is a YouTube of it opening: https://youtu.be/Ce5ktjl02D4

You can see the tracks in the pictures below 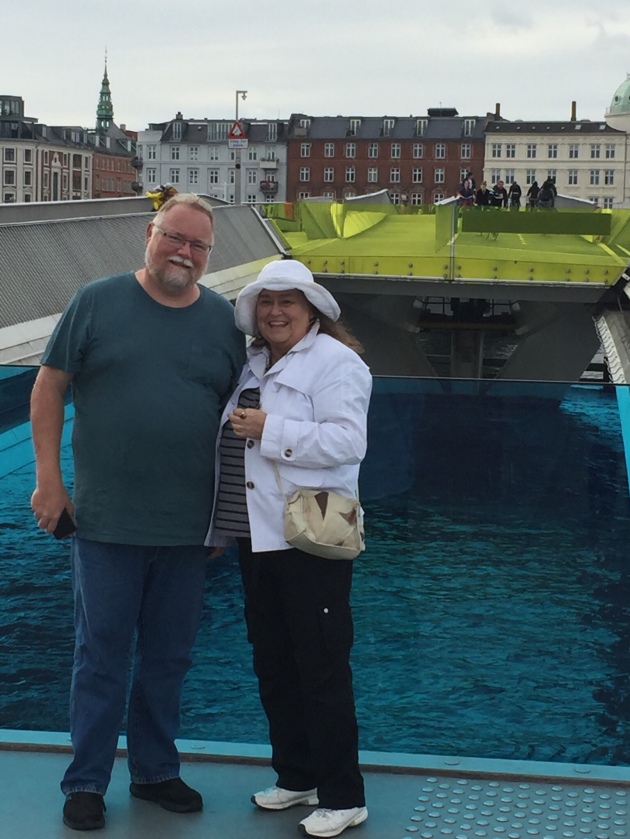 For dinner tonight we had intended to eat seafood at a small inexpensive boat docked at the end of the bridge above. Unfortunately I’m still not completely fluent in military time and failed to realize it closed at 6 pm. So we wandered the neighborhood for a bit checking menus. We had stopped at a boat docked in the Nyhavn canal across from our hotel and while reading the menu, the waiter/busker of a certain aged flirted with Lois and next thing we knew we were seated inside as the only guests. By the time we left there were a few more patrons. We all enjoyed our meals. Lou’s ordered the seafood symphony which was their version of a captains platter- salmon, hake and cod each cooked differently served with a crawfish, a couple of roster oysters, and mussels all on a bed of saffron cream. Mike got the “traditional” flatfish while I opted for what was billed as a ” smaller plate” of fish cakes along with a bowl of fish soup. All the dishes were tasty, Mike’s fish and the fish cakes in particular. My soup was basically heavy cream with a bit of fish, lobster and a few veggies. For dessert I ordered and we all shared Rhubarb Cake. I loved it. The cake had rhubarb in it and was served with a rhubarb compote, cherries and whipped cream. While not cheap, we all enjoyed our dinner. 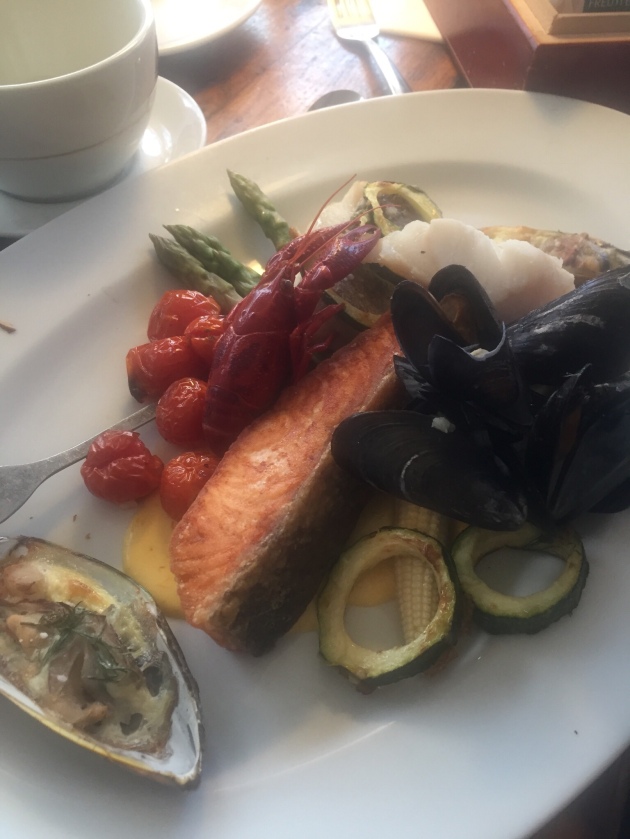 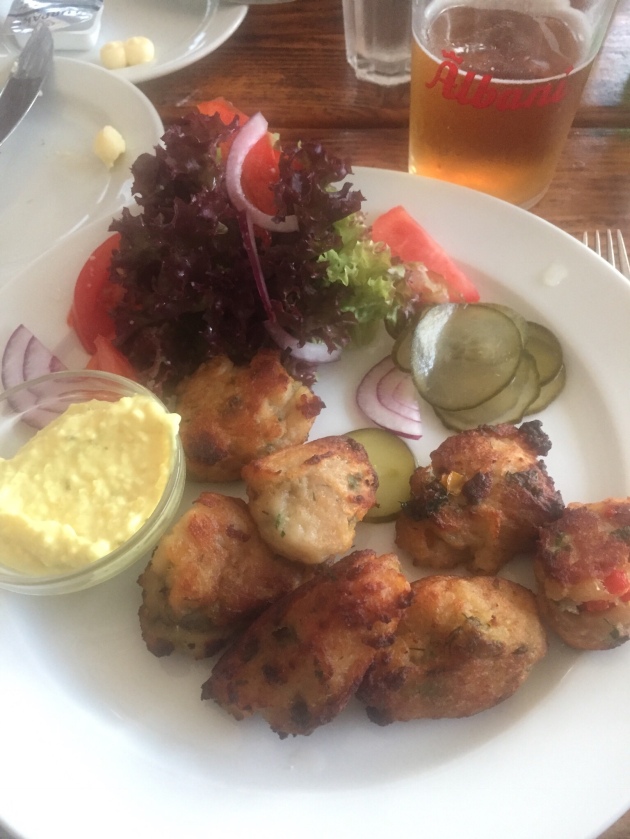 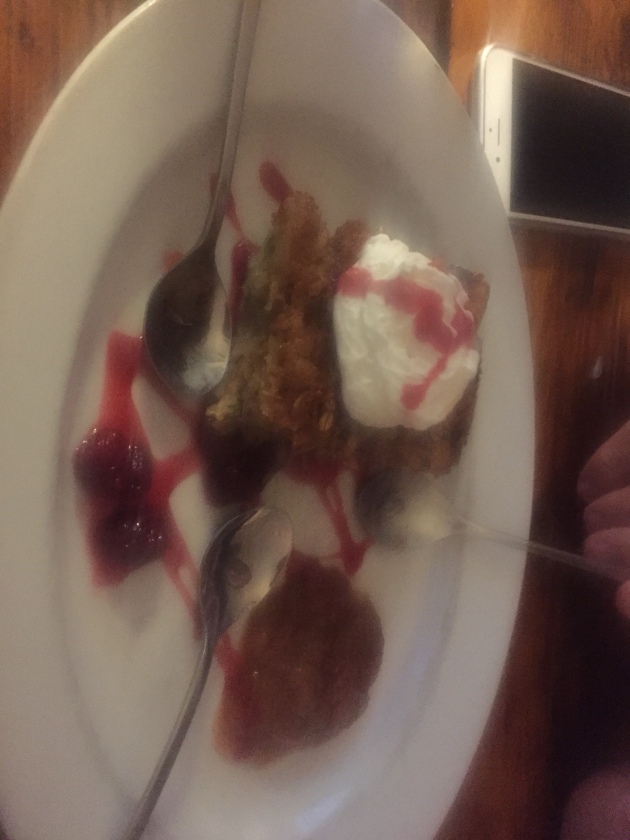 This was our view of sunset from our table…here’s hoping that the adage “pink sky at night sailor’s delight” holds true…if that and the weather man are right, we should have a perfect last day here to take our HoHo boat tour of the canals!