Awoke after 11 hours of glorious sleep in a comfy bed and a cool room (thanks to the open window and great desk fan) to clouds and drizzle. More on today’s adventure on the Hop On (Don’t) Hop Off (much) bus in a bit but first some info about our hotel and last night’s dinner.

We are staying at Hotel Bethel upon the recommendation of our cruise buds, Peggy & Lowell who stayed here prior to their Baltic cruise last year. Copenhagen is EXPENSIVE and hotels are crazy here. A standard Hampton Inn type room is rarely under $200 bucks. This hotel is smack dab in the middle of Nyhavn, the “new” harbor which is an area with lots of cafes and the harbor of course.

Lois (Mike’s Mom) paid $100 more (over four nights) and her room over looks the canal. Those are her two windows in the upper left part of the yellow just below the curved roof. Our room is across the hall, is slightly smaller and opens onto the courtyard. The staff has been great and very friendly. So far all Danes have been.

After checking in yesterday, we all “rested our eyes” for a little bit and then groggily awoke thanks to the alarm I set and walked across the bridge to a traditional restaurant for dinner. We all ended up ordering pork and we each shared with the other. The first was roasted sliced pork with red cabbage, broccoli salad and potatoes. Next up was what was advertised as traditional pork and potatoes. The pork was “fried” in butter so was very crispy. The sauce was nothing special. The last was said to be the dish typically made of leftovers. This was pork, potato and pickled beet cubes sautéed together. It reminded me if corned beef hash. All were very tasty!

After dinner we skedaddled back across the canal to the hotel and were in bed before nine. 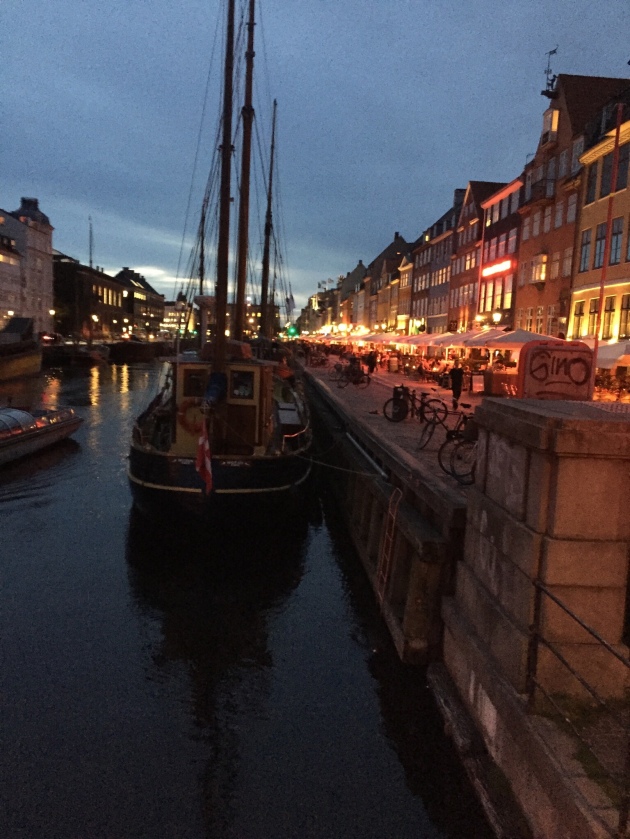 After our great sleep, we had the delish breakfast included in our hotel price. I’ll take some pictures and post about it sometime soon. We then joined the top of this post pictured HoHo bus at our corner. Mike and I don’t usually do the Hop on buses but since our time here is short we thought it the easiest way to see “everything”. There are two competing companies here, one offers 48 hours on the bus and boat while for the same price the other company sells a 24 hour ticket for their bus along with one sixty minute boat tour of the canals, but wait! Act NOW and we will make the bus ticket good for 72 hours! Being the bargain hunters we are we decided we would do that since the HoHo boat loop was the same on both, we just won’t have the ability to hop off of it…or do it more than once.

Due to the drizzle, I didn’t take ant pictures on the bus, but a good lunch at a cafe around the corner, we re-boarded the bus and rode it to Rosenborg Castle. 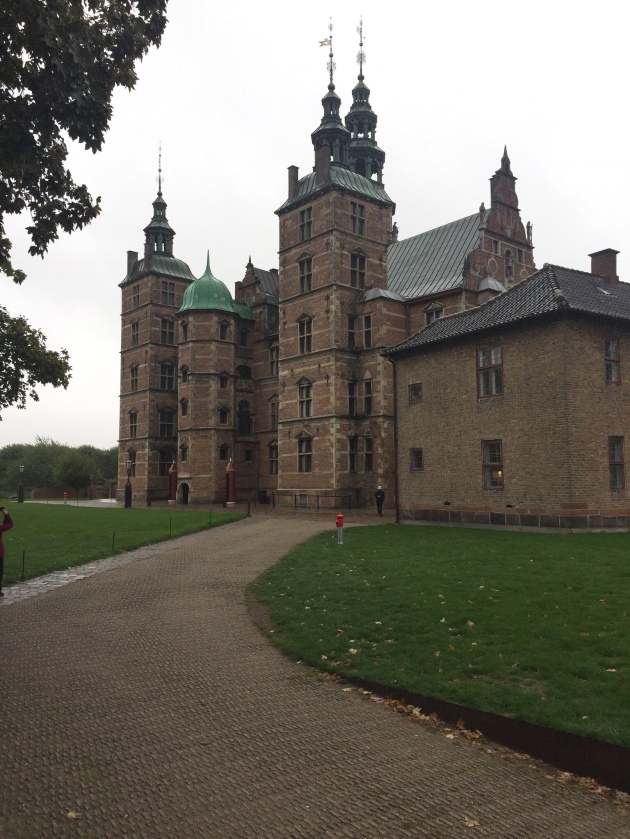 This was originally the royals country place…it’s located all of a 15 minute walk from the city palace. Crazy…oh to be royal! The castle includes the King’s garden which is now a park open to the public.

The interior’s are pretty fabulous and compared to Versailles (which was said to have influenced this castle) a more intimate scale though it’s still pretty grand. 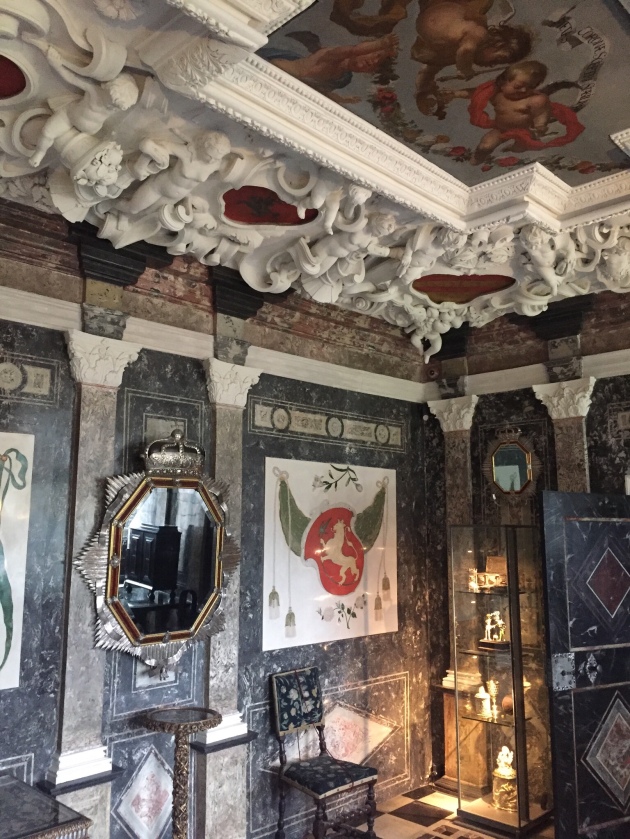 The thrones above (surrounded by three sterling silver lions) have been used for all the coronations. The king who built the castle had another throne that got even more use. It even flushed!

The basement of the castle serves as the Treasury and exhibits the more valuable collections of the royal. In addition to the guns and jewelry pictured below there are rooms of ivory, amber, and silver. 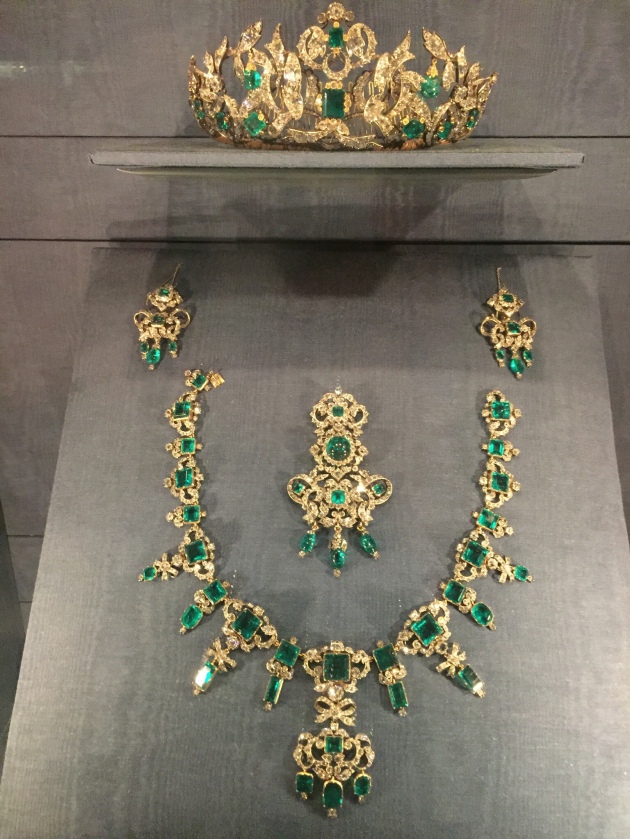 And most importantly the crowns! 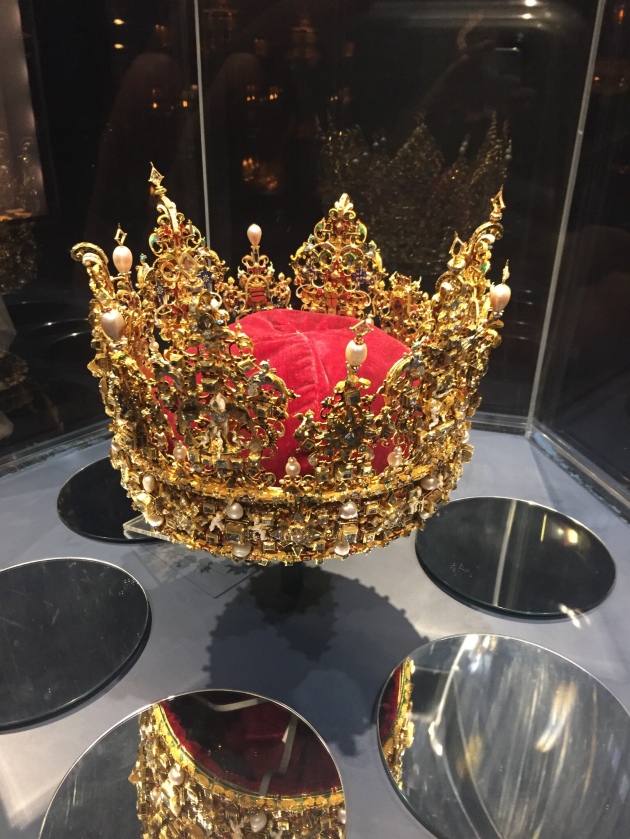 We elected to walk back to the hotel which just happened to take us by the Ice Bar (which Peggy, Lowell and their grandson Caden had recommended-I’ll let you ask Peggy why she let an eleven year old behind the bar to serve shots to Grandma). We all had a great time and enjoyed our cocktails in glasses made of ice.

Everything in the bar (seats, tables, art) is made of blocks of ice from a lake in Norway and the entire space is cooled to between -3 and -8 degrees centigrade (26.6-17.6 Fahrenheit). It was certainly cold after the first five minutes, I was hugging my parka close! The decor is based on different Hans Christian Andersen tales. You can see me wearing the Emperor’s new suit and sitting in throne decorated with the original princess from Frozen (not the Disneyied version) Any warmer and the ice gets cloudy, any colder and its too brittle. 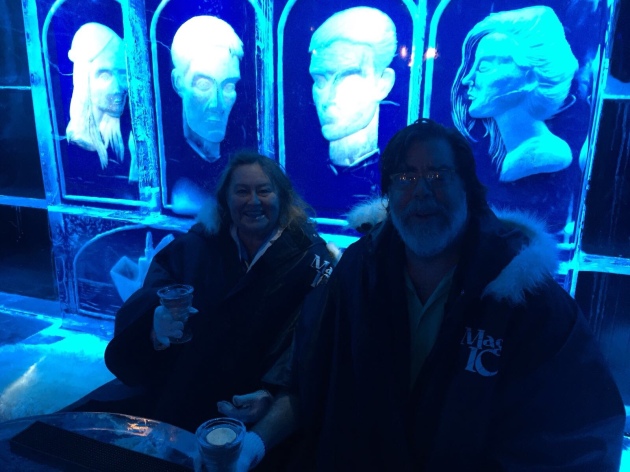 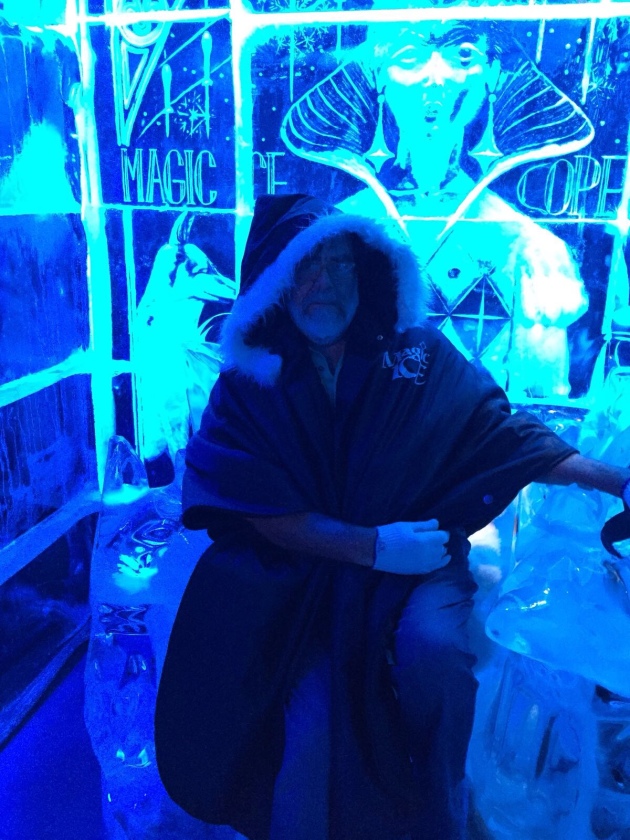 Mike and Lois took the Irish bartender up on his offer of a complimentary aquavit shot. I’ll let you decide what Lois thought of it.

We then continued our walk on to the hotel and stopped for a danish hotdog. The Danes think theirs are better than ours. I didn’t see a lot of difference though they did have some roasted onions (think the onion chips on an everything bagel) which were tasty. Turns out our dogs were just an appetizer as we also stopped a little closer to the hotel for some middle eastern food. Mike had a schwarma gyro, me a falafel one, and Lois a chicken schwarma platter. Needless to say we aren’t going hungry.

All in all a fun day, Lois said she had a great time and isn’t too warn out even though we walked over two and a half miles today. While we hope tomorrow’s weather won’t be as dreary, it will hopefully be just as enjoyable!

One thought on “Drizzly Day”